Skip to main content
BIBLE SALE OF THE SEASON: For a Limited Time ~ Save on over 1,100 Bibles!
Captain Snout and the Super Power Questions: Don't Let the Ants Steal Your Happiness
By: Dr. Daniel Amen
Stock No: WW758327 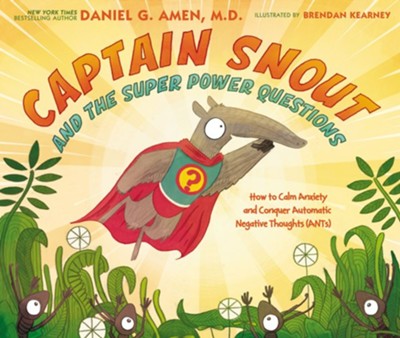 ▼▲
Captain Snout and the Super Power Questions; Don't Let the Ants Steal Your Happiness, written by board certified child psychologist Dr. Daniel Amen, playfully encourages children to correct their negative thinking patterns in order to live happier and healthier lives. Comical illustrations by Brendan Kearney bring the story alive as our main character, Captain Snout, reveals the super power questions that can rid us of our automatic negative thoughts (ANTs) and lead to accurate and truthful thinking.

Don't let ANTS steal your happiness! That is what Captain Snout says loud and clear in this playful and encouraging book about living a positive life without the stress of negativity. What exactly are these ANTs? Automatic Negative Thoughts &hellip; and Captain Snout says we can use his super power questions to be mindful of our thoughts and be heroic too?

Written with easy-to-read text for children ages 4 to 8,?Captain Snout and the Super PowerQuestions!

This quirky and comical picture book is a valuable resource for:

The Washington Post called Daniel Amen, MD the most popular psychiatrist in America and Sharecare named him the web’s #1 most influential expert and advocate on mental health.  Dr. Amen is a physician, double board certified psychiatrist, television producer and ten-time New York Times bestselling author.  He is the Founder and Medical Director of Amen Clinics in Costa Mesa and San Francisco, California, Bellevue, Washington, Reston, Virginia, Atlanta, Georgia and New York, New York.

While studying Architecture, Brendan Kearney realized he didn’t like rulers. He also discovered that drawing pictures for a living was a legitimate and fun career option, so he traded architecture for illustration as quickly as he could. Brendan now creates children’s book, bringing his own chaotic style and ideas to his projects. If you can’t find him drawing you’re likely to find him with a guitar or banjo in hand.

▼▲
I'm the author/artist and I want to review Captain Snout and the Super Power Questions: Don't Let the Ants Steal Your Happiness.
Back
Back