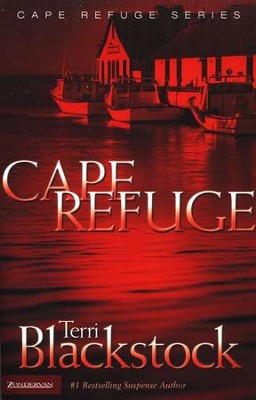 ▼▲
In the first book of the Cape Refuge series, tragedy strikes when Thelma and Wayne Owens, owners of the local bed and breakfast for refuges, are murdered. Main suspect is their son-in-law, Jonathan Cleary, but other suspects include questionable tenants of Hanover House. Daughters of Thelma and Wayne must put aside their differences and memories and work together to solve the mystery of their parents' killer as well as stop an innocent man of going to prison. Terri Blackstock, paperback, 395 pages.

A gripping tale from New York Times bestselling suspense author Terri Blackstock. When the kindest couple in Cape Refuge is found murdered at their church, their daughter will have to find the killer . . . before her own husband is convicted.

Wade and Thelma Owens run a halfway house on the small island of Cape Refuge that caters to wayward souls just out of prison. So when Wade and Thelma turn up brutally murdered, the town goes into shock, concerned that one of the Hanover House residents is a murderer who could strike again.

Shattered by her parents’ deaths, Morgan Cleary struggles to keep Hanover House running while her husband, Jonathan, has been arrested for the murder.

As the killer runs free, a lethal race against time ensues, with far more than the halfway house at stake.

▼▲
Cape Refuge is a peaceful island off the coast of Savannah, GA, a place where the weary and the persecuted retreat to find themselves again. Nothing bad happens here until Wade and Thelma Owens are murdered. Prior to their deaths, the couple had been under pressure from the town council to shut down Hanover House, their bed-and-breakfast for lost souls, because some of their clients had criminal records. And Jonathan Cleary, the couple's son-in-law, had wanted to move his wife, Morgan, out of the house, fearing for her safety. Blair Owens, the second daughter, had moved out years ago and become the town librarian, seeking refuge in books from scars incurred during a fire. When motive and means point to Jonathan, the sisters band together to find the true killer. As Morgan takes over running Hanover House, her example reawakens Blair's interest in God even as they discover that their perfect parents were keeping secrets that may have killed them and endangered everyone at Hanover House. Because of her strong and lengthy publishing history, Blackstock (Emerald Windows) belongs in library collections as a standard purchase; this first book in an new series is an excellent starting point. Copyright 2002 Cahners Business Information.

▼▲
Although Blackstock, a former bestselling romance author in the general market, is now well-known in the CBA for her writing partnership with Beverly LaHaye, her most successful books belong to the inspirational suspense genre, and this novel is no exception. On a small barrier island east of Savannah, Ga., lies Cape Refuge, the site of Hanover House, a halfway home for ex-cons and derelicts run by the island's most beloved no-nonsense Christian couple, Thelma and Wayne Owens. But when the Owenses are found spear-gunned through their throats in their warehouse church, the island and its inhabitants get turned upside-down. The Owens's daughter Morgan's husband, Jonathan, is charged with the murder, but former drug addict Gus Hampton and Hanover House resident Richard Dugan also fall under suspicion. As the Owenses' other daughter, Blair who has spent a lifetime rejecting faith and love because of facial scars from the mysterious burns she suffered as a young child examines her parents' papers, she discovers that Thelma and Wayne had a very shady past. Also drawn into the web of intrigue is a homeless teenager who comes to Hanover House seeking shelter from an abusive family. The pacing is a bit slow at the start, but good writing, well-honed descriptive details, compelling characters and a conclusion that doesn't succumb to pat answers keep the pages turning, making this an engaging novel for fans of Christian nail-biters. (Apr.) Copyright 2002 Cahners Business Information.

▼▲
I'm the author/artist and I want to review Cape Refuge, Cape Refuge Series #1.
Back
Back