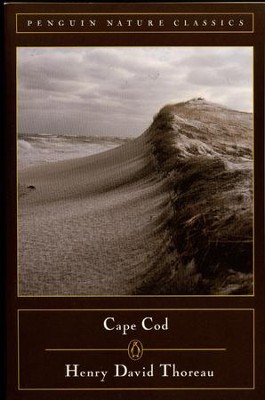 ▼▲
One of the least-known of all Thoreau's works, and one of the most heavily criticised, it still remains the work of the one of the most original authors and philosophers in America's past. Chronicling his discovery along with shores of Cape Cod, he spends his nights in lighthouses, fishing huts and farms, observing the variety of life and death that surrounds the sea. 319 pages, softcover.

▼▲
Thoreau's classic account of his meditative, beach-combing walking trips to Cape Cod in the early 1850s, reflecting on the elemental forces of the sea, with an introduction by Paul Theroux

Cape Cod chronicles Henry David Thoreau’s journey of discovery along this evocative stretch of Massachusetts coastline, during which time he came to understand the complex relationship between the sea and the shore. He spent his nights in lighthouses, in fishing huts, and on isolated farms. He passed his days wandering the beaches, where he observed the wide variety of life and death offered up by the ocean. Through these observations, Thoreau discovered that the only way to truly know the sea—its depth, its wildness, and the natural life it contained—was to study it from the shore. Like his most famous work, Walden, Cape Cod is full of Thoreau’s unique perceptions and precise descriptions. But it is also full of his own joy and wonder at having stumbled across a new frontier so close to home, where a man may stand and "put all America behind him."

Part of the Penguin Nature Library edited by Edward Hoagland

Paul Theroux, an internationally acclaimed travel writer, is also the author of over two dozen novels and works of non-fiction. He divides his time between Cape Cod and the Hawaiian Islands.

▼▲
I'm the author/artist and I want to review Cape Cod - eBook.
Back
Back