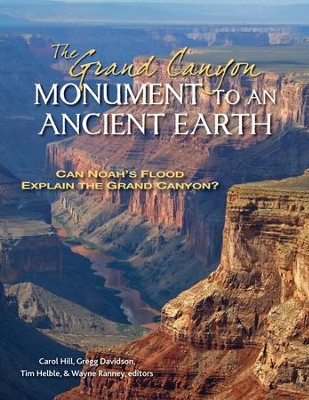 Young Earth advocates often use the Grand Canyon as a showcase to argue not only that the thick fossil-bearing layers were laid down in a single catastrophic flood, but that the Bible requires this to be true. In The Grand Canyon, eleven authors and editors - all scientists and apologists - address both the biblical and scientific claims that Noah's flood can account for the Earth's fossil-rich layers. Like many in the scientific community, they find these assumptions to be riddled with factual errors.

This visually stunning book is written primarily for non-scientist Christians who have a desire to clearly understand the arguments and evidence in favor of both young- and old-Earth models, to find answers to those who make the Grand Canyon's majesty the centerpiece of their arguments, or to improve their ministry to scientifically literate believers and seekers.

Readers will learn that Young Earth interpretations of Genesis are not necessarily true to the original Hebrew meaning. They will come away with an appreciation for why the vast majority of Christian geologists acknowledge an ancient Earth and why modern science is not antithetical to faith, but rather supports it. Readers will find that the Grand Canyon has a much grander history - in keeping with its Creator - than the brief period of compressed creation posited by flood geologists.

▼▲
I'm the author/artist and I want to review The Grand Canyon, Monument to an Ancient Earth: Can Noah's Flood Explain the Grand Canyon?.
Back
Back