Skip to main content
Calvin: A Biography
By: Bernard Cottret
Stock No: WW831590 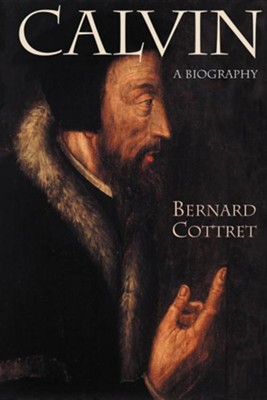 ▼▲
"Modesty, softness, and mildness"-such was John Calvin, in his own words. This brief self-portrait will surprise posterity, quick as it is to detect in Calvin a deeply passionate man of zealous action. Calvin adds elsewhere: "I acknowledge myself to be timid, soft, and cowardly by nature." He repeated the same idea feelingly on the eve of his death, calling himself "timid" and "fearful" before an astounded group of pastors who knew by experience that the old fellow could raise up storms. These various descriptions of Calvin strongly underline the vigor of a character that owed all its energy to God alone. At the same time, the apparent contradictions within Calvin's personality make it hard to capture his true nature. The large number of biographies attempted to date attest to this fact, many of which simply picture Calvin as a rigid fundamentalist or as a totalitarian who ruled Geneva with an iron hand. Such interpretations, however, are much too one-dimensional. This sterling new biography by Bernard Cottret opts for a Calvin "in movement," thus distinguishing itself from works that present Calvin as a man of relatively static character. The aim of this book is simply to recover the truth, or rather to reclaim the intelligibility of a man in his time. This is a historian's Calvin, the work of a university professor who is neither a theologian nor an ordained minister. Cottret's welcome approach sheds new light on the great Reformer's personality by concentrating on the milieu in which Calvin did his life's work. In the largest part of the book, Cottret explores Calvin's life chronologically. We are introduced to the world into which Calvin was born, a Europe in the throes of upheavalowing to the development of the printing press and divergent religious views. We follow Calvin from his birth and childhood in Noyon to his school years in Paris. We accompany Calvin on his humanistic and literary pursuits in Basel, his early ministry in Geneva, and his halcyon Strasbourg years. Finally, we move again to Geneva, where the brunt of Calvin's serious-and better known-life was lived. Along the way we encounter the major issues of Calvin's day-the sacrifice of the Mass, iconoclasm, predestination, the Arianism of Michael Servetus-issues to which he reacted with all his religious emotion. We tarry with him in Geneva and get an up-close look at the governance of Calvinism's "holy city." And we share in Calvin's joys and sorrows through a reading of his prolific correspondence. In the final chapters, Cottret explores thematic aspects of Calvin's persona-Calvin the polemicist, the preacher, and the writer-and looks in greater depth at his foremost work, the Institutes of the Christian Religion. Widely acclaimed in its French edition, this balanced and beautifully written biography will take its place among the best-and most enjoyable-portraits of Calvin's life, work, and lasting influence.

▼▲
I'm the author/artist and I want to review Calvin: A Biography.
Back