Skip to main content
Get Christmas Ready Sale: Deals on over 1,150 titles thru 9/27.
A Place Called Heaven for Kids: 10 Exciting Things About Our Forever Home
By: Dr. Robert Jeffress
Stock No: WW094286 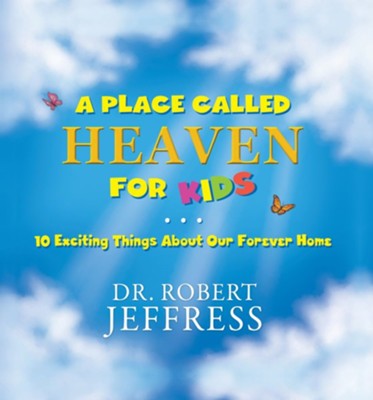 A Place Called Heaven for Kids: 10 Exciting Things About Our Forever Home

This product is part of our current Early Christmas Sale promotion.
Buy Item

▼▲
Children wonder about lots of things. When a death occurs, they sometimes ask difficult questions: Is heaven real? What does it look like? Where will we live, and what will we do? How do people get there? With colorful illustrations and simple language, Jeffress answers 10 of their most common queries. Ages 4 to 7. 32 pages, hardcover from Baker.

▼▲
Children ask a lot of questions. When a death occurs in their family or circle of friends, those questions inevitably turn toward heaven. Is heaven real? Where is it? What will we do there? How do we get there? And more. Parents and grandparents often find themselves at a loss to explain a place that they suddenly may realize they don't know much about either.

Colorfully illustrated and using simple concepts and language that children ages 4-7 can understand, A Place Called Heaven for Kids provides answers to 10 of these common questions. In doing so, it gives children peace of mind about their lost loved one as well as a comforting, biblical picture of their forever home. For parents, grandparents, and caregivers, it offers a positive, constructive way to grieve, hope, and grow with the children in their lives.

▼▲
Dr. Robert Jeffress is senior pastor of the 13,000-member First Baptist Church in Dallas, Texas, and is a Fox News contributor. His daily radio program, Pathway to Victory, is heard on more than 900 stations nationwide, and his weekly television program is seen on thousands of cable systems and stations in the United States and in 195 countries around the world. Known for his bold, biblical stands on cultural issues, Jeffress has been interviewed on more than 2,000 radio and TV programs, including Good Morning America, CBS This Morning, Fox & Friends, MSNBC, CNN, Real Time with Bill Maher, and Hardball with Chris Matthews. He is the author of Not All Roads Lead to Heaven, A Place Called Heaven, and Choosing the Extraordinary Life. He lives in Dallas.

▼▲
I'm the author/artist and I want to review A Place Called Heaven for Kids: 10 Exciting Things About Our Forever Home.
Back
Back