Skip to main content
OUR BIGGEST BARGAIN SALE EVER: Over 6,000 deals at never-seen-before prices ~ through 8/23. Shop now >
Cahokia: Ancient America's Great City on the Mississippi
By: Timothy R. Pauketat
Stock No: WW117476 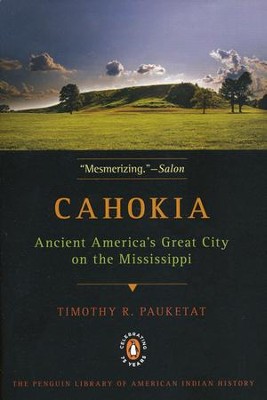 ▼▲
Almost a thousand years ago, a Native American city flourished along the Mississippi River near what is now St. Louis. A thriving metropolis at its height with a population of twenty thousand, a sprawling central plaza, and scores of spectacular earthen mounds, Cahokia gave rise to a new culture that spread across the plains; yet by 1400 it had been abandoned.

In Cahokia, anthropologist Timothy R. Pauketat reveals the story of the city and its people as uncovered by the excavations of American corn-belt archaeologists. These digs have revealed evidence of a powerful society, including complex celestial timepieces, the remains of feasts big enough to feed thousands, and disturbing signs of large-scale human sacrifice.

Drawing on these pioneering digs and a wealth of analysis by historians and archaeologists, Pauketat provides a comprehensive picture of what's been discovered about Cahokia and how these findings have challenged our perceptions of Native Americans. A lively read and a compelling narrative of prehistoric America.

▼▲
The fascinating story of a lost city and an unprecedented American civilization located in modern day Illinois near St. Louis

While Mayan and Aztec civilizations are widely known and documented, relatively few people are familiar with the largest prehistoric Native American city north of Mexico-a site that expert Timothy Pauketat brings vividly to life in this groundbreaking book. Almost a thousand years ago, a city flourished along the Mississippi River near what is now St. Louis. Built around a sprawling central plaza and known as Cahokia, the site has drawn the attention of generations of archaeologists, whose work produced evidence of complex celestial timepieces, feasts big enough to feed thousands, and disturbing signs of human sacrifice. Drawing on these fascinating finds, Cahokia presents a lively and astonishing narrative of prehistoric America.

▼▲
Timothy R. Pauketat is an American archaeologist and professor of anthropology at the University of Illinois at Champaign-Urbana. After earning a BS in anthropology and earth sciences from Southern Illinois University Edwardsville, he worked as a staff archaeologist at the Center for American Archaeology. Pauketat is best known for his research on Cahokia, the center of the large, regional Mississippian culture that extended throughout the Mississippi Valley and tributaries.


"Page by page, Pauketat compiles the fascinating details of a complex archeological puzzle; explaining the study of cross-cultural goddess worship, cave art, hand tools and games, this volume doubles as a crash-course in the archeological method." -- Publishers Weekly


"In "Cahokia: Ancient America's Great City on the Mississippi," Timothy R. Pauketat tells the story of the mounds, from what archeologists have been able to discover about their origins nearly a thousand years ago to their near &shy;destruction and partially successful preservation in the modern age."-- The Wall Street Journal

▼▲
I'm the author/artist and I want to review Cahokia: Ancient America's Great City on the Mississippi.
Back
Back