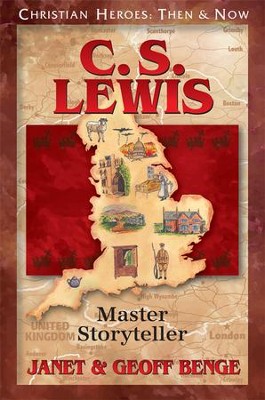 From his earliest childhood, C.S. Lewis loved to hear and tell stories. Persuaded that stories could reveal the truth about the real world in a unique way, the literature professor would write more than thirty books, including science fiction, theology, literary criticism, and fantasy.

▼▲
When I was homeschooling my children, I read aloud to them daily. We took a history-based approach to our reading time, using literature to tell the stories of our past. One series we pulled from regularly was Christian Heroes: Then & Now. This series not only told fascinating biographies of brave men and woman, it also exposed us to new countries and cultures.

There are hidden treasures in these books about our Christian ancestors. They tell tales that build our faith by revealing God at work in the lives of people who placed their trust in him! They are testimonies to how God will work through both ordinary and extraordinary people alike. They celebrate the type of courageous, dedicated, and godly heroes we want our children to admire.

Little pieces of the stories bring back the fondest memories of our homeschool days. I found these books personally faith-building, and I know they have helped shape my childrens faith as well. Approx. 200 pages each, softcovers from YWAM.

The Benges are a husband-wife writing team who have more than twenty years of writing experience, and they have done very well in presenting this master storyteller's life in storytelling form as a part of the Christian Heroes: Then & Now series. Brilliant and defining, for certain.

Clive Staples Lewis, also known as Jack, had a younger brother named Warren, and the family lived in Ireland, where Jack was engaged in the "stories of this country, more than of the religious struggles going on." (p. 14)

His early interest in hearing these stories and of making up his own, since he had a wonderful imagination, would lead him to become the beloved storyteller that we know through his Chronicles of Narnia and the other scholarly, fantasy and theological books which bear his name.

From a staunch atheist, to accepting Jesus Christ's story as the greatest ever told, his own life's story is revealed in this easy-to-read version, which is so worthy of any readers time. He had many heartbreaks, but seemed to find a solace in the fantasies that he created.

C. S. Lewis's life as depicted by the Benges is scripted in a powerful, yet simplistic way, and certainly gives a very deep insight into one of the master storytellers of all times. -- Sharon I. Rideout, Christian Book Previews.com

▼▲
I'm the author/artist and I want to review C.S. Lewis: Master Storyteller.
Back