Skip to main content
CYBER WEEK SALE! Spot great deals up to 88% off. >
The Butterfly and the Violin, Hidden Masterpiece Series #1
By: Kristy Cambron
Stock No: WW690595 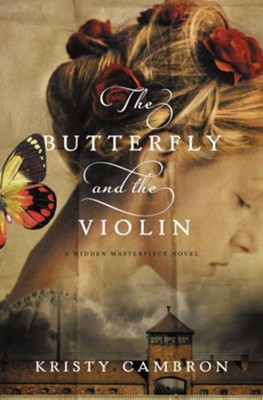 The Butterfly and the Violin, Hidden Masterpiece Series #1

Based on the real orchestra composed of prisoners at Auschwitz, The Butterfly and the Violin shows how beauty and hope can penetrate even the darkest corners.

Present day: Manhattan art dealer Sera James watched her world crumble at the altar two years ago, and her heart is still fragile. Her desire for distraction reignites a passion for a mysterious portrait she first saw as a young girl—a painting of a young violinist with piercing blue eyes.

In her search for the painting, Sera crosses paths with William Hanover—the grandson of a wealthy California real estate mogul—who may be the key to uncovering the hidden masterpiece. Together Sera and William slowly unravel the story behind the painting’s subject: Austrian violinist Adele Von Bron.

1942: A darling of the Austrian aristocracy, talented violinist, and daughter to a high-ranking member of the Third Reich, Adele Von Bron risks everything when she begins smuggling Jews out of Vienna. In a heartbeat, her life of prosperity and privilege dissolves into a world of starvation and barbed wire.

As Sera untangles the secrets behind the painting, she finds beauty in the most unlikely places: the grim concentration camps of Auschwitz and the inner recesses of her own troubled heart.

"Cambron expertly weaves together multiple plotlines, timelines, and perspectives to produce a poignant tale of the power of love and faith in difficult circumstances. Those interested in stories of survival and the Holocaust, such as Eli Wiesel’s Night, will want to read." —Library Journal, starred review

KRISTY CAMBRON is an award-winning author of historical fiction, including her bestselling debut The Butterfly and the Violin, and an author of nonfiction, including the Verse Mapping Series Bibles and Bible studies. Kristy's work has been named to Publishers Weekly Religion & Spirituality TOP 10, Library Journal Reviews’ Best Books, RT Reviewers’ Choice Awards, received 2015 & 2017 INSPY Award nominations, and has been featured at CBN, Lifeway Women, Jesus Calling, Country Woman Magazine, MICI Magazine, Faithwire, Declare, (in)Courage, and Bible Gateway. She holds a degree in Art History/Research Writing and lives in Indiana with her husband and three sons, where she can probably be bribed with a peppermint mocha latte and a good read. You can connect with her at: kristycambron.com and versemapping.com. Instagram: @kristycambron; Twitter: @KCambronAuthor; Facebook: @KCambronAuthor; and Pinterest: Kristy Cambron.

▼▲
'In chapters alternating between past and present, debut novelist Cambron vividly recounts interwoven sagas of heartache and recovery through courage, love, art, and faith.” -- Publishers Weekly

'In her historical series debut, Cambron expertly weaves together multiple plotlines, time lines, and perspectives to produce a poignant tale of the power of love and faith in difficult circumstances. Those interested in stories of survival and the Holocaust, such as Eli Weisel’s Night, will want to read.' -- Library Journal

'Alternating points of view skillfully blend contemporary and historical fiction in this debut novel that is almost impossible to put down. Well-researched yet heartbreaking scenes shed light on the horrors of concentration camps, as well as the contrasting beauty behind the prisoner's artwork. Two stories are carefully intertwined and demonstrate that there is always hope in God despite the monstrosities inflicted by man.' -- RT Book Reviews, 4-1/2 Stars TOP PICK!

'This amazing book was emotionally engaging and very hard to put down. Its message of trusting God no matter the circumstances is one that will stay with your customers.” -- CBA Retailers + Resources

▼▲
I'm the author/artist and I want to review The Butterfly and the Violin, Hidden Masterpiece Series #1.
Back
Back