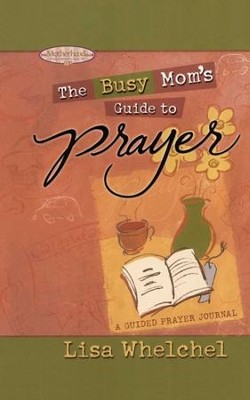 ▼▲
The heart of a mom is wrapped up in the people she loves---her children, her husband, her co-workers, her friends. She wants to give them the very best of herself, but sometimes her busy schedule gets in the way of the most precious gift she can give them---her prayers.

With this unique tried-and-proven prayer system, even the busiest moms can have a rich prayer life that impacts the people she loves the most. Author Lisa Whelchel offers seven categories of prayer that can be used as they are or modified to fit each mom's special needs. By investing just ten minutes a day, in one month, a mom can bring nearly one hundred and fifty matters before her heavenly Father. From requests for her children's protection to wisdom in her personal life to praise for God's constant faithfulness, this simple plan brings order and purpose to prayer. Spiral-bound.

▼▲
The Busy Mom’s Guide to Prayer helps organize our prayer priorities so that we can pray in a practical and effective way and be confident that our petitions are covering people and issues that are important to us.

Surely you know someone who is an amazing prayer warrior but finds herself caught in the battle of day-to-day chores...and then winds up feeling like she has short-changed her prayer life because she has been slaying the dragons that cross her path in daily life. She’s one of the busiest people you know, who truly cares about the people in her life...and in her children’s lives...and in her friends’ lives.

Lisa Whelchel has now given us (and our prayer warrior friends) a tool that can be used to leverage those rare and treasured moments of free time when we want to pray, but simply don’t know where to begin. The Busy Mom’s Guide to Prayer helps organize our prayer priorities so that we can pray in a practical and effective way and be confident that our petitions are covering people and issues that are important to us. Lisa has provided the framework, you get to provide the content, and the Holy Spirit will provide the power!

▼▲
Lisa Whelchel, best known for her long standing role as "Blair" in the television series, The Facts of Life, is a wife and a home schooling mother of three children. She has appeared in several feature films and is an author, vocalist, Grammy nominated songwriter, and an inspirational speaker at churches and conferences nationwide.

▼▲
I'm the author/artist and I want to review Busy Mom's Guide to Prayer - eBook.
Back
×
Back
×