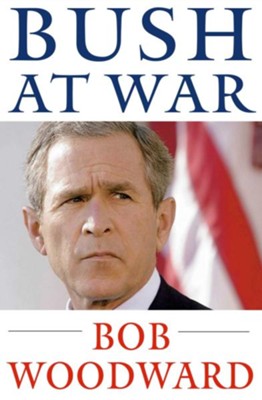 ▼▲
With his unmatched investigative skill, Bob Woodward tells the behind-the-scenes story of how President George W. Bush and his top national security advisers, after the initial shock of the September 11 attacks, led the nation to war.
Extensive quotations from the secret deliberations of the National Security Council -- and firsthand revelations of the private thoughts, concerns and fears of the president and his war cabinet -- make Bush at War an unprecedented chronicle of a modern presidency in time of grave crisis.
Based on interviews with more than a hundred sources and four hours of exclusive interviews with the president, Bush at War reveals Bush's sweeping, almost grandiose, vision for remaking the world. "I'm not a textbook player, I'm a gut player," the president said.
Woodward's virtual wiretap into the White House Situation Room reveals a stunning group portrait of an untested president and his advisers, three of whom might themselves have made it to the presidency.
Vice President Dick Cheney, taciturn but hard-line, always pressing for more urgency in Afghanistan and toward Iraq.
Secretary of State Colin Powell, the cautious diplomat and loyal soldier, tasked with building an international coalition in an administration prone to unilateralism.
Defense Secretary Donald Rumsfeld, the brainy agitator and media star who led the military through Afghanistan and, he hopes, through Iraq.
National security adviser Condoleezza Rice, the ever-present troubleshooter who surprisingly emerges as perhaps the president's most important adviser.
Bush at War includes a vivid portrait of CIA director George Tenet, ready and eager for covert action against terrorists in Afghanistan and worldwide. It follows a CIA paramilitary team leader on a covert mission inside Afghanistan to pay off assets and buy friends with millions in U.S. currency carried in giant suitcases.
In Bush at War, Bob Woodward once again delivers a reporting tour de force.

▼▲
Thomas Powers The New York Times Book Review Remarkable...Bush at War is akin to an unofficial transcript of 100 days of debate over war in Afghanistan.
Evan Thomas Newsweek Human and convincing in its telling detail.
Steve Neal Chicago Sun-Times Woodward has produced the best book yet written about the September 11 terrorist attacks on America and how Bush fought back.
Fred Barnes The Weekly Standard Woodward...is the best pure reporter of his generation, perhaps ever. He uncovers more things than anyone else.
James Rubin The New York Observer A great read...Bob Woodward has unearthed important new information on the behind-the-scenes struggles that have led to success -- and failure -- in President Bush's War on Terror.
Fouad Ajami The Washington Post Book World A work of spareness and authority...We are fortunate to have this richly detailed view of our nation's central policy command.

▼▲
I'm the author/artist and I want to review Bush at War - eBook.
Back
Back