A Burning in My Bones: The Authorized Biography of Eugene Peterson, Translator of The Message
By: Winn Collier 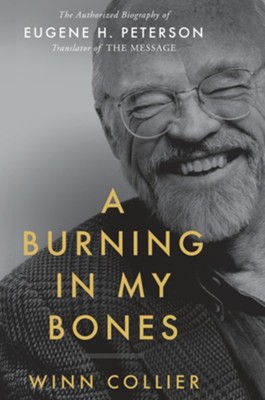 A Burning in My Bones: The Authorized Biography of Eugene Peterson, Translator of The Message

▼▲
Encounter the multifaceted life of this influential and creative pastor! Granted exclusive access to Peterson and his materials, Collier offers unique insights into the influences and experiences that shaped Eugene's unquenchable faith and unforgettable stories; the inspiration that led him to translate The Message; and his successes and struggles as a pastor, husband, and father. 240 pages, hardcover from Waterbrook.

▼▲
This essential authorized biography of Eugene Peterson offers unique insights into the experiences and spiritual convictions of the iconic American pastor and beloved translator of The Message.

"This hunger for something radical—something so true that it burned in his bones—was a constant in Eugene’s life. His longing for God ignited a ferocity in his soul."

Encounter the multifaceted life of one of the most influential and creative pastors of the past half century with unforgettable stories of his lifelong devotion to his craft and love of language, the influences and experiences that shaped his unquenchable faith, the inspiration for his decision to translate The Message, and his success and struggles as a pastor, husband, and father.

Author Winn Collier was given exclusive access to Eugene and his materials for the production of this landmark work. Drawing from his friendship and expansive view of Peterson’s life, Collier offers an intimate look into a rare, remarkable life that is at once artful, sacred, and earthy.

For Eugene, the gifts of life were inexhaustible: the glint of fading light over the lake, a kiss from Jan, a good joke, a bowl of butter pecan ice cream. As you enter into his story, you’ll find yourself doing the same—noticing how the most ordinary things shimmer with a new and unexpected beauty.

▼▲
In addition to A Burning in My Bones, Winn Collier has authored four books (Restless Faith, Let God: The Transforming Wisdom of Fran&ccedil;ois F&eacute;nelon, Holy Curiosity, and Love Big, Be Well) and contributed to numerous other volumes. He has written for multiple periodicals including Christianity Today, Christian Century, Relevant, and the Washington Post.

A pastor for twenty-five years, Winn was the founding pastor of All Souls Charlottesville in Virginia. He now directs the Eugene Peterson Center for Christian Imagination at Western Theological Seminary in Michigan. He holds a PhD from the University of Virginia, where he focused on the intersection of religion and literary fiction. Winn and his wife, Miska, a spiritual director, live in Holland, Michigan, with their two sons.

▼▲
I'm the author/artist and I want to review A Burning in My Bones: The Authorized Biography of Eugene Peterson, Translator of The Message.
Back
×