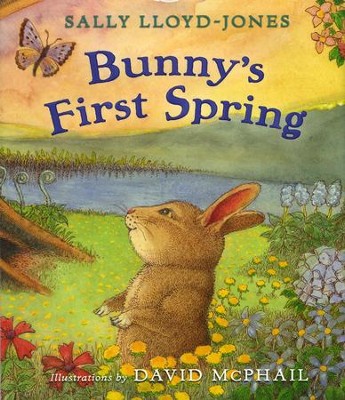 ▼▲
When a bunny is born in spring, he sees the world as green and new and full of hope. But as the season start to change, the bunny worries that the earth might be dying! Bunny's First Spring celebrates the Easter season and rebirth, little ones will be fascinated by the bunny's discovery of life, death and nature's miraculous transformations.

When a bunny is born in spring, he sees the world as green and new and full of hope.  But as the seasons change, the bunny worries that the earth may be dying.  In bestselling author’s Sally Lloyd-Jones’ latest picture book celebrating the Easter season and rebirth, nature speaks to the bunny, assuring him of something more. Award-winning artist David McPhail’s whimsical illustrations reflect the beauty of the world around us as Lloyd-Jones’ inspirational text prompts readers to celebrate the changing seasons and the miracle of nature’s rebirth.

Sally Lloyd-Jones is an award-winning New York Times bestselling writer of over 30 books for children. Her books are written for children (although a lot of adults are reading them, too) and include: The Jesus Storybook Bible, an ALA Notable and winner of the Platinum Book Award; Thoughts to Make Your Heart Sing, winner of the Association of Christian Publisher’s Adult Devotional Book of the year; and the Christopher Medal winner, Baby Wren and the Great Gift. Sally was born in Africa, educated in England, studied at the Sorbonne, and now lives in New York City. She can be found at sallylloyd-jones.com.

▼▲
A charming baby bunny experiences seasonal changes in his environment throughout his first year of life in this emotion-filled story from the author of The Jesus Storybook Bible (2007). In lyrical, soothing prose, the text follows the brown bunny through the four seasons, noting his observations of the changes in nature. The bunny is concerned by the changes he sees in the fall and by the seemingly dead appearance of trees, grass and flowers in winter. His parents and other animals reassure the bunny about the cycle of rebirth, and the bunny celebrates his springtime birthday with joy. Although the story can be interpreted as a Christian parable, there is no overt religious content until the final page, which includes a paraphrased quotation from Martin Luther about God's promise of new life being revealed in springtime as well as in books, presumably the Bible. (The actual quotation is not included.) Due to the mostly secular appearance of the story, this odd placement means the book is likely to be overlooked by readers looking for religious approaches to springtime stories. Delicate watercolor illustrations in McPhail's distinctive style are filled with delightful details and varied seasonal perspectives, as well as appealing rabbits and other creatures. The concluding quotation and the subtext of rebirth make this an oh-so-subtle Easter title that readers may well miss. (Picture book/religion. 3-6) -- Kirkus

A Martin Luther quote ends this book, reminding readers that God has written the promise of new life in every springtime leaf. But in the beginning, there is a bunny, born in the spring, who sees that “the earth is new, like me.” As other newly born animals take their first steps or fly from the nest, the bunny notices the beauty of the world. As the seasons change, the bunny becomes attuned to the cycle of life, though, at times, it frightens him: the world seems to be dying before his eyes. “And Yet-And Yet!” the woodpecker taps. Sure enough, after a winter’s sleep, the bunny understands that life can be resurrected from apparent death, and the sun’s warmth can return to gladden hearts. McPhail’s ink-and-watercolor artwork displays both the innocence and concern that come as the bunny begins to understand that the world is complicated, and it culminates in the joy of fresh beginning. Although this can be read on a secular level, young Christian children will see overtones of the Jesus story in Lloyd-Jones’ comforting words. -- Booklist

▼▲
I'm the author/artist and I want to review Bunny's First Spring.
Back
Back