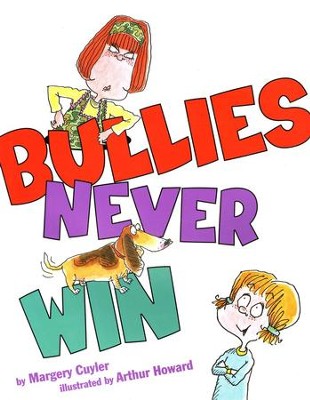 ▼▲
Jessic was very nervous going to school everyday. Firstgrade can be hard when you are picked on by a bully. WillJessica listen to her Mom's advice and stand up forherself? Recommended for ages 4-8.

▼▲
When the class bully, Brenda Bailey, makes fun of Jessica’s skinny legs and her boyish lunch box, Jessica doesn’t know what to do. She doesn’t want to be a tattletale, but she also wants the bullying to stop. Can Jessica find the courage to stand up for herself? From the team behind the first three books about Jessica and her worries, Bullies Never Win is immediately relatable, relevant, and a must-have for every school and library.

▼▲
Margery Cuyler has written stories ever since she learned how to write. A children's book editor and author for more than twenty years, she now devotes most of her time to writing. Her many children's books include 100th Day Worries, illustrated by Arthur Howard, and The Biggest, Best Snowman, illustrated by Will Hillenbrand. Margery lives with her family in Princeton, New Jersey, in a house that's said to be haunted by a ghost!

Arthur Howard is the illustrator of Goatilocks and the Three Bears by Erica S. Perl; Noodle & Lou by Liz Garton Scanlon; the Mr. Putter & Tabby series, Gooseberry Park series, and Motor Mouse series by Cynthia Rylant; and his own picture books. He has also coauthored and illustrated many books of humor for adults and appeared for seven seasons in the PBS math-oriented production Square One Television. He lives in New York City.

▼▲
I'm the author/artist and I want to review Bullies Never Win.
Back
Back