Skip to main content
Bulletproof Marriage: Together You Can Make It Through Anything, A 90-Day Devotional, imitation leather
By: Adam Davis, Lt. Col. David Grossman
Stock No: WW557595 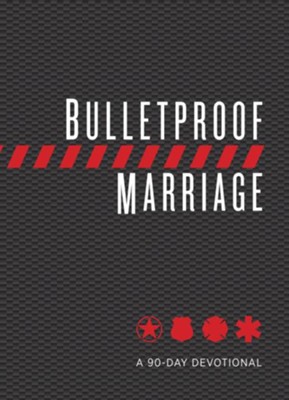 Bulletproof Marriage: Together You Can Make It Through Anything, A 90-Day Devotional, imitation leather

Together you can make it through anything.

We live in a troubled society, and those maintaining order and justice are some of the most overworked, unappreciated, and underpaid. The nature of their jobs is taxing both personally and relationally.

Bulletproof Marriage is a 90-day devotional that applies biblical principles to support and strengthen the marriages of military members, law enforcement officers, and first responders. Each day includes a Bible verse, inspirational reading, quick tips, action steps for both husband and wife, and a prayer.

Sometimes the greatest love is not to sacrifice your life but to live a life of sacrifice. Invite God to help you make your marriage bulletproof.

▼▲
ADAM DAVIS is a former law enforcement officer who knows what it’s like to face volatile situations at every turn. Now his mission is to offer help and hope with his speaking engagements and inspirational books for those who walk the thin blue line. His speaking experience includes delivering keynotes at major colleges as well as churches and conferences throughout the United States. Adam is truly poised to become the "go-to" voice of encouragement for officers seeking reassurance from someone who understands what they live every day. The uncertainty they face can also take its toll at home with family, and most importantly, in marriages. In 2000, Adam married his high school sweetheart. Adam is an alumnus of Troy University, an ordained minister, and a member of the Alabama Writers’ Conclave and the Alabama Writers’ Forum. If you ask his friends and family, most will tell you Adam is passionate about his faith, family, and his divine purpose. His most prized role is that of husband to Amber and father to three precious children.

A retired US Army Lieutenant Colonel, DAVE GROSSMAN is an internationally recognized scholar, author, and speaker who is one of the world’s foremost experts in the field of human aggression and the roots of violence and violent crime. He is also one of the nation’s leading law enforcement trainers. Dave is a former Army Ranger, West Point psychology professor, and professor of military science who drew on his combined experience to establish a new field of scientific endeavor that he has named Killology. He has served as an expert witness and consultant in numerous federal and state courts, including the United States vs. Timothy McVeigh. Dave has five patents to his name, has published four novels, two children’s books, and six nonfiction books, which include his "perennial bestseller" On Killing (with over half a million copies sold), and the New York Times best-selling book Control: Exposing the Truth about Guns, coauthored with Glenn Beck. Some of his other books are On Combat, Assassination Generation, and Sheepdogs: Meet Our Nation’s Warriors, written with Stephanie Rogish.

▼▲
With Bulletproof Marriage, Col. Grossman and Adam Davis provide precision guidance for sheepdogs on how to build resilient marriages. This is an essential guide for America’s protectors to work on their most important relationship, which often suffers mightily while they serve us.
- Mark Divine, author of The Way of the SEAL, and founder of Sealfit and Unbeatable Mind

Marriage is not easy and being married to a sheepdog is not for the faint of heart. This book, along with your Bible, is a great tool to keep your marriage strong! This will bless many couples. Thank you for writing it.
- Stephanie Rogish, wife of a cop and author of the Sheepdogs kids book

▼▲
I'm the author/artist and I want to review Bulletproof Marriage: Together You Can Make It Through Anything, A 90-Day Devotional, imitation leather.
Back
Back