Skip to main content
NEW CYBER DEALS Save up to 90% thru 12/12  shop now >
Building an Orchestra of Hope: How Favio Chavez Taught Children to Make Music from Trash
By: Carmen Oliver
Illustrated By: Luisa Uribe
Stock No: WW854674 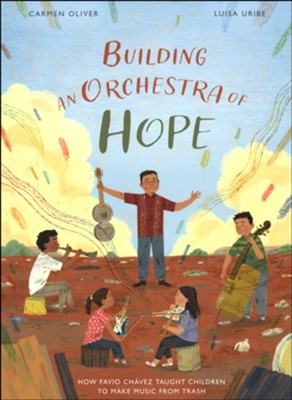 Building an Orchestra of Hope: How Favio Chavez Taught Children to Make Music from Trash

▼▲
In hopes of creating a better world, a music teacher started giving lessons in a Paraguayan town built on a landfill. Soon he had more students than instruments. His solution? Recycle garbage with a local carpenter's help, turning drainpipes into flutes and paint cans into violas! Based on a true story. Features dynamic illustrations. Ages 4 to 9. 44 pages, hardcover from Eerdmans.

▼▲
An exuberantly illustrated true story about innovation, community, and the power of music.

In Cateura, Paraguay, a town built on a landfill, music teacher Favio Chavez longed to help the families living and working amid the hills of trash. How could he help them find hope for the future? Favio started giving music lessons to Cateura’s children, but soon he encountered a serious problem. He had more students than instruments!

But Favio had a strange and wonderful idea: what if this recyclers’ town had its own recycled orchestra? Favio and Col&aacute;, a brilliant local carpenter, began to experiment with transforming garbage into wonder. Old glue canisters became violins; paint cans became violas; drainpipes became flutes and saxophones. With repurposed instruments in their hands, the children of Cateura could fill their community—and the world—with the sounds of a better tomorrow.

Based on an incredible true story, Building an Orchestra of Hope offers an unforgettable picture of human dignity reclaimed from unexpected sources. Carmen Oliver’s inviting words and Luisa Uribe’s dynamic illustrations create a stirring tribute to creativity, resilience, and the transformative nature of hope.

▼▲
Carmen Oliver is the author of the picture book biography A Voice for the Spirit Bears (Kids Can) and the Bears Make the Best Buddies series (Capstone). She is the founder of the Booking Biz, an agency that brings children's authors and illustrators to schools, libraries, and special events. Carmen lives in Round Rock, Texas, with her family. Visit her website at carmenoliver.com or follow her on Twitter @carmenoliver.

Luisa Uribe has illustrated many books for children, including Your Name Is a Song (Innovation Press), Areli Is a Dreamer (Random House), and Dear Earth.From Your Friends in Room 5 (HarperCollins). In 2018, her work on The Vast Wonder of the World (Millbrook) received the Society of Illustrators Dilys Evans Founder's Award. Luisa lives in Bogot&aacute; , Colombia, where she enjoys drawing, reading, and chasing her cat around the house. Visit Luisa's website at luisauribe.com or follow her on Instagram at @lupencita.

▼▲
The Horn Book Magazine
"An inspiring picture book that demonstrates how environmentalism and the arts can unite to bring joy to an entire community."

▼▲
I'm the author/artist and I want to review Building an Orchestra of Hope: How Favio Chavez Taught Children to Make Music from Trash.
Back
Back