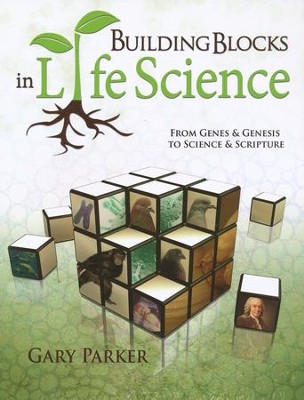 ▼▲
Looking at biology through the prism of the "war of the worldviews," Building Blocks of Life Science sets the "4 C's" of biblical history: Creation, corruption, catastrophe, and Christ, against Darwin's "substitute god, an alternate religion." Throughout, author Gary Parker contrasts creationism with what evolutionists believed in the past, as well as other elements they currently believe.

▼▲
My son and I clapped heartily for the college senior on the stage. He was the sole creationist debating three pro-evolution professors on the creation/evolution controversy and holding his own very well. The sad thing was that he was attending a local Christian college.

In the past, students attending Christian colleges did not have to worry about having their creationist beliefs undermined by the faculty. Unfortunately, that is no longer the case. To strengthen parents and young people and help them develop a strong Christian worldview, Dr. Gary Parker has written the second in the Creation Foundation Series, Building Blocks in Life Science.

Dr. Parker divides the book into three sections: "Biological Changes," "Patterns in Structure and Development," and "DNA and the Origin of Life." He further subdivides the units into chapters on genes, natural selection, various aspects of creation and Darwinism, classification, development of life within the embryo, chemical evolution, DNA, and other subjects. Dr. Parker discusses the facts, why evolution cannot explain the evidence, and how creation does. Each chapter concludes with a short worksheet/quiz. The answers to the questions are in the back.

The book is aimed at upper-level high school students and college students. The writing is direct but difficult reading for many who have been away from science classes for a few years. I would not have high school students try this book until they have completed biology.

Dr. Parker writes well. The material is fascinating. I learned more about genetics than I ever expected to know, including why the Jurassic Park-style of cloning could not have happened and why evolutionists are so intent on finding life on Mars. One small problem occurred in Chapter 5, where the numbers used in the text did not coincide with the numbers used in the chart. Having a glossary would also be helpful. Dr. Parker utilizes a number of Scriptures, including Colossians 1:17 and I Peter 3:15.

▼▲
I'm the author/artist and I want to review Building Blocks in Life Science: From Genes & Genesis to Science & Scripture.
Back
×