BIG SUMMER BLOWOUT: 3 Days Only! Save up to 90% thru Wednesday. Shop now >
The Build: Designing My Life of Choppers, Family, and Faith
By: Paul Teutul 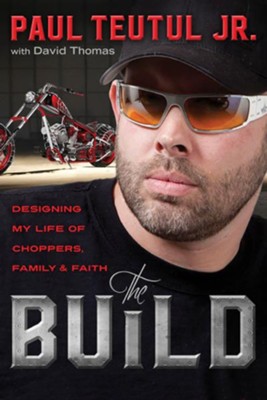 The Build: Designing My Life of Choppers, Family, and Faith

The Build reveals the "behind the scenes" story of the popular TV reality series American Chopper for the show's millions of fans.

Author Paul Teutul, Jr., is arguably the most creative builder of custom "chopper" motorcycles in the world. His talents were revealed to millions of TV viewers worldwide on American Chopper, as well as later on a spinoff series, American Chopper Senior vs Junior. The Build gives the reader at Paul Jr.'s life behind the camera, which included volcanic conflict with his father and business mentor, Paul Sr. Using his own story of improbable success as an illustration, Paul Jr. offers insights on how anyone can find and activate often hidden talents. In a charming, often humorous way, The Build is a rallying cry to unleash God-designed creativity and live life to the fullest.

▼▲
PAUL TEUTUL JR was just 27 when American Chopper: Jet Bike premiered on the Discovery Channel, featuring "Paulie" and his father, Paul Sr., building a custom chopper for 2002's Laconia Bike Week. Part of Bike Weekend, the one-off special and the intrinsic family dynamics so captivated audiences that a full series following the Teutuls and their business, Orange County Choppers, soon followed in 2003. Six years of family ups and downs ensued, culminating in 2009 with Senior firing Junior, who waited out his one-year non-compete clause before establishing his own business, Paul Jr. Designs. Today, Paul Jr. Designs continues to thrive, producing custom bikes for a variety of individual and corporate clients. There have been TV commercials and personal appearances since 2012 as well, but the most important development in Paul's life occurred when his wife, Rachael, gave birth to their son Hudson Seven Teutul in February 2015.

▼▲
"At the very beginning of what we came to know as reality TV was American Chopper—inspiring motorbike lovers all over the world with the beauty of what could be imagined into being on two wheels. Here’s Paul Jr. telling his personal journey—still imagining, still building. Every man’s journey is his own; every man’s heart needs building from the inside."
—Russell Crowe, actor, film producer, musician

"Paul Jr’s book The Build is a must-read. I respect his talent, but mostly I respect how he is living out his faith in the public eye. Paul’s candidness about his father is not to attack but to shine the light of truth on how a son is affected by his father. Thanks for writing this book, Junior!"
—Todd Hoffman, "Gold Rush Todd"

▼▲
I'm the author/artist and I want to review The Build: Designing My Life of Choppers, Family, and Faith.
Back
×
Back
×