Bugtime Adventures: Riding for a Fall (The Story of Elisha Healing Naaman), DVD 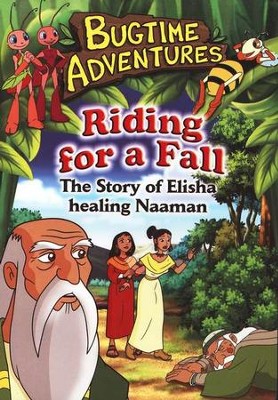 Bugtime Adventures: Riding for a Fall (The Story of Elisha Healing Naaman), DVD

▼▲
Naaman, a general in the army, arrives home after a victorious battle. But while he was gone, his leprosy has spread. He goes to see the prophet Elisha who sends his servant out with instructions for Naaman to follow. Naaman is angered at Elisha's behavior but follows the instructions and is healed.

Meanwhile, Antoni supervises a building project which collapses when he tries to cut corners. As the bugs search for more wood, Antoni convinces half the group to take a short cut while the other half follows the directions. Which half of the group will be successful in their task? Children will enjoy these entertaining stories as they learn about obedience and following instructions. Running time: Approximately 25 minutes. Recommended for ages 4 to 9.

▼▲
I'm the author/artist and I want to review Bugtime Adventures: Riding for a Fall (The Story of Elisha Healing Naaman), DVD.
Back
×
Back
×