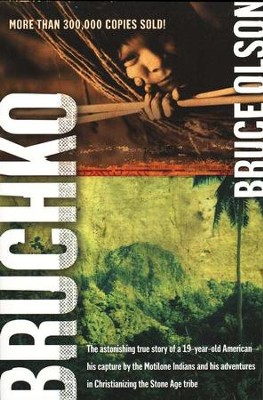 ▼▲
What happens when a teenage boy leaves home and heads into the jungles to evangelize a murderous tribe of South American Indians? For Bruce Olsen it meant capture, disease, terror, loneliness, kdnaping and torture. But what he discovered by trial and error has revolutionized the world of missions. Living with the Motilone Indians since 1961, Olson's efforts have sent a spiritual ripple around the world that reaches deep into the hearts of mission-minded Christians and anthropologists as well as the government of Colombia.

What happens when a nineteen-year-old boy leaves home and heads into the jungles to evangelize a murderous tribe of South American Indians? For Bruce Olson, it meant capture, disease, terror, loneliness, and torture. But what he discovered by trial and error has revolutionized then world of missions.

Bruchko, which has sold more than 300,000 copies worldwide, has been called “more fantastic and harrowing than anything Hollywood could concoct.” Living with the Motilone Indians since 1961, Olson has won the friendship of four presidents of Colombia and has made appearances before the United Nations because of his efforts. Bruchko includes the story of his 1988 kidnapping by communist guerrillas and the nine months of captivity that followed. This revised version of Olson’s story will amaze you and remind you that simple faith in Christ can make anything possible. “[Bruchko is] an all-time missionary classic. Bruce Olson is a modern missionary hero who has modeled for us in our time the reaching of the unreached tribes.” --Loren Cunningham Co-founder, Youth With A Mission

Bruce Olson, born in Minnesota and now a citizen of Colombia, is a linguist and graduate of sociology from a South American university. He has won the friendship of four Colombian presidents and appeared before the United Nations. His first book, Bruchko, has sold more than 300,000 copies worldwide. He lives in the jungle on the border of Colombia and Venezuela.

▼▲
I'm the author/artist and I want to review Bruchko.
Back
×
Back
×