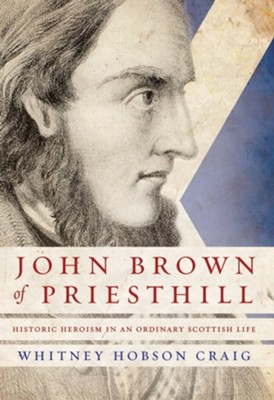 ▼▲
We love our popular heroes—tough, strong, adventuring fellows with lives full of daring exploits. But the obscure Scottish Covenanter John Brown of Priesthill is a hero of a different kind.

The Scottish Covenanters of the 17th century, inspired by the leadership of Reformer John Knox over 100 years earlier, refused to accept a debased and authoritarian Christianity headed by arrogant kings and clergy. The Covenanters believed that they should choose their own Christian teachers according to a strict Biblical standard and not by the dictates of arbitrary authority. John Brown was one such teacher.

Like the early Christian martyrs of the Roman Empire who would rather suffer and die than deny their God, John Brown stood firmly for the life and liberty found only in the Lord Jesus Christ. His life was ordinary. He sought to provide for his home and family. Known as a carrier, Brown carried various valuables belonging to neighbors abroad in the community to trade for them. Hardly a glamorous vocation, it yet required a great deal of trust among those he served. Thus, when he preached, people listened. Tyrants fear such men. John Brown died because he trusted and served His God above all else.

John Brown of Priesthill: History Heroism in an Ordinary Scottish Life is perfect for classroom and homeschool teachers who want their students to read and absorb a true hero's story, as well as Christian parents who want to inspire and strengthen their older children's hearts with John Brown's and the entire Scottish Covenanter story.

An inspiring tale worthy of passage from generation to generation.

Dane Love was born in Cumnock, Ayrshire. He was educated in the town, followed by Jordanhill College of Education in Glasgow, from where he graduated as a schoolteacher. Thanks to his long-standing interest in Scottish history, local history, and genealogy, Love has spent many hours traveling Scotland conducting research for his books and has traced his ancestry back to Robin Love, who fought for Bonnie Prince Charlie at the battles of Culloden and Prestonpans. He is a fellow of the Society of Antiquaries of Scotland, committee member of the Ayrshire Archaeological and Natural History Society, honorary secretary of the Scottish Covenanter Memorials Associations, and a principal teacher at Irvine Royal Academy. Love is married to Hazel and they have two children: Gillian and Dane the Third.

Betty Edwards was born in Jackson, Mississippi. She was educated at Converse College in South Carolina and graduated from the University of Mississippi. While working as a homemaker and raising two sons, she coordinated the College Fellowship at First Presbyterian Church in Jackson for more than 20 years, focusing mainly on the students at Belhaven University. She also worked at the First Presbyterian Church tape library. Edwards has had a long interest in Scottish, and in particular, Covenanter history dealing with John Brown of Priesthill, back to whom she has traced her ancestry. Her grandfather and grandmother on her mother's side moved south from their home state of Illinois in 1912 and a short time afterwards her grandfather became the senior pastor the First Presbyterian Church of Vicksburg, Mississippi. Her grandfather on her mother's side moved from Springfield, Illinois in the late 1800s to pastor the First Presbyterian Church of Vicksburg, Mississippi. She has been recognized for her countless hours of research while visiting Scotland and support of Covenanter history through her designation as an honorary vice president of the Scottish Covenanters Memorial Association of Scotland. Edwards was married to the late Ray Edwards and has two sons and three grandchildren who are the joy of her life.

Whitney Hobson Craig grew up learning about the Scottish Presbyterian tradition while she attended Emerald Mountain Christian School in Alabama, a school that specialized in understanding the lessons of Christian history toward living the Biblical faith. A life-long reader, Hobson Craig gravitates to biographies and seeks to understand people's place in history. She graduated from the University of Alabama with a degree in journalism and political science. Whitney currently resides in South Bend, Indiana with her husband and son. She works as a communications specialist with a local non-profit dedicated to providing choice and possibility to people with intellectual and developmental disabilities.

▼▲
I'm the author/artist and I want to review John Brown of Priesthill: Historic Heroism in an Ordinary Scottish Life.
Back
×