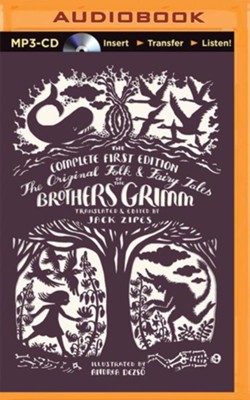 The Original Folk and Fairy Tales of the Brothers Grimm: The Complete First Edition - unabridged audiobook on MP3-CD

When Jacob and Wilhelm Grimm published their Children's and Household Tales in 1812, followed by a second volume in 1815, they had no idea that such stories as "Rapunzel," "Hansel and Gretel," and "Cinderella" would become the most celebrated in the world. Yet few people today are familiar with the majority of tales from the two early volumes, since in the next four decades the Grimms would publish six other editions, each extensively revised in content and style. For the very first time, The Original Folk and Fairy Tales of the Brothers Grimm makes available in English all 156 stories from the 1812 and 1815 editions. These narrative gems are newly translated and brought together in one beautiful audiobook.

From "The Frog King" to "The Golden Key," wondrous worlds unfold—heroes and heroines are rewarded, weaker animals triumph over the strong, and simple bumpkins prove themselves not so simple after all. Esteemed fairy tale scholar Jack Zipes offers accessible translations that retain the spare description and engaging storytelling style of the originals. Indeed, this is what makes the tales from the 1812 and 1815 editions unique—they reflect diverse voices, rooted in oral traditions, that are absent from the Grimms' later, more embellished collections of tales. Zipes's introduction gives important historical context, and the audiobook includes the Grimms' prefaces and notes.

A delight to listen to, The Original Folk and Fairy Tales of the Brothers Grimm presents these peerless stories to a whole new generation of listeners.

▼▲
Jack Zipes is the translator of The Complete Fairy Tales of the Brothers Grimm (Bantam), the editor of The Great Fairy Tale Tradition (Norton), and the author of Grimm Legacies (Princeton), among many other books. He is professor emeritus of German and comparative literature at the University of Minnesota.

▼▲
I'm the author/artist and I want to review The Original Folk and Fairy Tales of the Brothers Grimm: The Complete First Edition - unabridged audiobook on MP3-CD.
Back
×