Skip to main content
CYBER WEEK SALE: Up to 88% off, thru 12/6. >
My Brother's Keeper: Christians Who Risked All to Protect Jewish Targets of the Nazi Holocaust - eBook
By: Rod Gragg
Stock No: WW84376EB 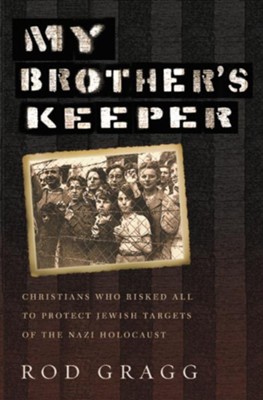 My Brother's Keeper: Christians Who Risked All to Protect Jewish Targets of the Nazi Holocaust - eBook

Thirty captivating profiles of Christians who risked everything to rescue their Jewish neighbors from Nazi terror during the Holocaust.

My Brother's Keeper unfolds powerful stories of Christians from across denominations who gave everything they had to save the Jewish people from the evils of the Holocaust. This unlikely group of believers, later honored by the nation of Israel as "The Righteous Among the Nations," includes ordinary teenage girls, pastors, priests, a German army officer, a former Italian fascist, an international spy, and even a princess.

In one gripping profile after another, these extraordinary historical accounts offer stories of steadfast believers who together helped thousands of Jewish individuals and families to safety. Many of these everyday heroes perished alongside the very people they were trying to protect. There is no doubt that all of their stories showcase the best of humanity -- even in the face of unthinkable evil.

▼▲
Rod Gragg is a historian and the author of more than twenty books on topics in American history. His works have been selections of the Book-of-the-Month Club, the History Book Club, and the Military History Book Club. His literary awards include the Douglas Southall Freeman History Prize, the Fletcher Pratt Award, and the James I. Robertson Award. One of his books, Confederate Goliath, was the basis of a PBS film of the same name, and another, Forged in Faith, was nominated for the George Washington Book Prize. He and his family live in South Carolina, where he serves as director of the CresCom Bank Center for Military & Veterans Studies at Coastal Carolina University.

▼▲
"The Holocaust stands as history's central metaphor for evil. At a time when fear and divisiveness are resurging around the globe, we badly need this harrowing account of unsung heroes who risked all for the sake of good."—Philip Yancey, New York Times bestselling author
"Gragg provides an inspiring look at 30 Christian heroes who defied the Nazis at great personal risk and bucked the general tide of indifference and paralysis that overwhelmed almost all bystanders to the Holocaust. Jan Karski, who tried to get F.D.R. to respond to the mass murders of Europe's Jews, will be familiar to many readers, but most of the people profiled here are not. For example, relatively few will have heard of Feng Shan Ho, a Chinese Christian, who saved over 12,000 Jews. When Ho's promotion to consul-general at the Chinese embassy in Vienna coincided with increasing reports of Jewish persecution, he issued visas to Austrian and German Jews, allowing them to emigrate to Shanghai. Ho persisted despite opposition by his own government, which wanted to maintain its relationship with Hitler. [...] Gragg gives a sense of these activists' mind-boggling bravery."—Publisher's Weekly

▼▲
I'm the author/artist and I want to review My Brother's Keeper: Christians Who Risked All to Protect Jewish Targets of the Nazi Holocaust - eBook.
Back
Back