Skip to main content
CYBER WEEK SALE! Spot great deals up to 88% off. >
Brothers at Arms: American Independence and the Men of France and Spain Who Saved It - eBook
By: Larrie D. Ferreiro
Stock No: WW84058EB 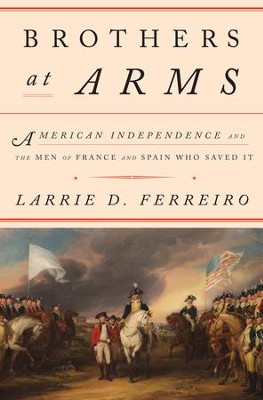 Brothers at Arms: American Independence and the Men of France and Spain Who Saved It - eBook

The remarkable untold story of how the American Revolution's success depended on substantial military assistance provided by France and Spain, and places the Revolution in the context of the global strategic interests of those nations in their fight against England.

In this groundbreaking, revisionist history, Larrie Ferreiro shows that at the time the first shots were fired at Lexington and Concord the colonists had little chance, if any, of militarily defeating the British. The nascent American nation had no navy, little in the way of artillery, and a militia bereft even of gunpowder. In his detailed accounts Ferreiro shows that without the extensive military and financial support of the French and Spanish, the American cause would never have succeeded. France and Spain provided close to the equivalent of $30 billion and 90 percent of all guns used by the Americans, and they sent soldiers and sailors by the thousands to fight and die alongside the Americans, as well as around the world.

Ferreiro adds to the historical records the names of French and Spanish diplomats, merchants, soldiers, and sailors whose contribution is at last given recognition. Instead of viewing the American Revolution in isolation, Brothers at Arms reveals the birth of the American nation as the centerpiece of an international coalition fighting against a common enemy.

▼▲
LARRIE D. FERREIRO received his PhD in the History of Science and Technology from Imperial College London. He teaches history and engineering at George Mason University in Virginia and the Stevens Institute of Technology in New Jersey. He has served for over thirty-five years in the US Navy, US Coast Guard and Department of Defense, and was an exchange engineer in the French Navy. He is the author of Measure of the Earth: The Enlightenment Expedition That Reshaped Our World and Ships and Science: The Birth of Naval Architecture in the Scientific Revolution, 1600-1800. He lives with his wife and their sons in Virginia.

▼▲
"Remarkable. . . . Brothers at Arms is one of the most important books on the American Revolution published in this decade."  —Dallas Morning News

"[I]n his wide-ranging study . . . [Ferreiro] draws attention to people and events that George Washington and the other eminent founders routinely overshadow. The result is a familiar story told from a new vantage point. Revisionist in the best sense, Mr. Ferreiro’s book deftly locates the war within the rivalrous 18th-century Atlantic world. . . . . Impressive."  —The Wall Street Journal

"Engaging and informative, Ferreiro’s Brothers at Arms refutes the widely-held view that the Marquis de Lafayette alone represented France until Vicomte de Rochambeau and Admiral de Grasse sealed the fate of Lord Cornwallis at Yorktown. . . .  Ferreiro is a skillful storyteller. His experience in the U.S. Navy, Coast Guard and Department of Defense, and as an exchange engineer in the French Navy, is on display in his descriptions of battles on land and at sea. Brothers at Arms is filled with telling—and titillating—details. . . . In the end, however, the enduring importance of Brothers at Arms is Ferreiro’s accurate (and perhaps humbling) reminder that when Brig. Gen. O’Hara, representing Cornwallis, emerged at Yorktown to surrender, and turned toward Rochambeau, he was acknowledging that the victory was as much France’s as it was America’s. And when Rochambeau wordlessly pointed him across the lane toward Washington, he was ’well aware to whom belonged the moment.’ After all, as Ferreiro concludes, ’the American nation was born as the centerpiece of an international coalition.’"  —Glenn Altschuler, Tulsa World

"Imporant as scholarship, Ferreiro’s history is also eminently fluid for all readers interested in the U.S.’s beginning."  —Gilbert Taylor, Booklist

"Ferreiro mounts a deeply informed, authoritative, and compelling argument for the importance of two major European powers to American independence. ’Instead of the myth of heroic self-sufficiency,’ he writes, ’the real story is that the American nation was born as the centerpiece of an international coalition.’ . . . Besides offering a vivid chronicle of combat, the author traces the tense negotiations between American emissaries in Europe—notably Benjamin Franklin and Silas Deane—and their French and Spanish counterparts. . . . A largely untold, engrossing history of our nation’s fraught, and unlikely, path to liberty."  —Kirkus  (starred review)

"For some time, historians have understood that globalization was born during the founding of the American colonies, north and south. Now comes Larrie Ferreiro to recount in this magnificent volume the myriad ways that the globalized world was very much in play when those colonies began to come undone—during the American Revolution. A whole canvas of passions and interests is illumined here, allowing us to see history through a thoroughly fresh lens." —Marie Arana, author of Bol&iacute;var: American Liberator

"As Larrie Ferreiro proves in this fascinating and groundbreaking account of the American Revolutionary War, there would have been no United States without the help of France and Spain.  Brothers at Arms is an important corrective to the notion that our nationhood was preordained.  As Ferreiro demonstrates time and time again, American independence depended on France and Spain." —Nathaniel Philbrick, author of Bunker Hill and Valiant Ambition

"In Brothers at Arms, Larrie D. Ferreiro recasts the American Revolution in a revealing new light by situating the local fight for freedom in the context of global power struggles. This eye-opening narrative takes us beyond the shores of the fledgling United States to show us how French and Spanish forces in places as far flung as Honduras and Gibraltar helped make victory possible." —Laura Auricchio, author of The Marquis: Lafayette Reconsidered

"This book will revive in an enlightened way an old controversy among Americans—both historians and educated laymen—concerning the American Revolution: Could it have been won without French and Spanish help? Professor Ferreiro’s answer is clearly given in the subtitle and throughout his book. The book is excellent—based on solid research and wide reading, argued with much spirit and insight. It is an illuminating and suggestive study deserving of a wide readership in and out of universities and colleges." —Robert L. Middlekauff, author of Washington’s Revolution

"Brothers in Arms vividly tells the forgotten story of how French and Spanish military and financial support enabled thirteen weak colonies to take down an empire. Anyone interested in how the United States actually won its independence should read this book."  —Kathleen DuVal, author Independence Lost

"Surprisingly the war that we people of the United States call our revolution, could not have succeeded if it were not part of a world war. Here is the story of the various motives that came together with a common purpose—the defeat of Great Britain—that resulted in our independence. Fascinating and revelatory." —Thomas Ch&aacute;vez, author of Spain and the Independence of the United States

▼▲
I'm the author/artist and I want to review Brothers at Arms: American Independence and the Men of France and Spain Who Saved It - eBook.
Back
Back