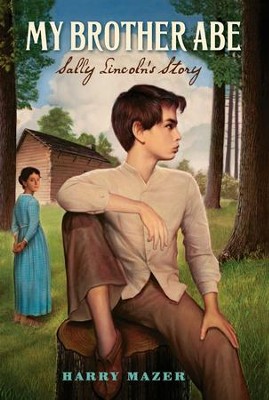 ▼▲
Virtually nothing is known about Sarah Lincoln, Abraham Lincoln's older sister. This novel follows the few known facts of the Lincoln family's early life, starting with the Lincolns' move from Kentucky to Indiana when Sarah was nine through their years living in a log cabin, the death of Sarah and Abe's mother when Sarah was eleven and Sarah's new responsibilities as woman of the cabin, culminate with the arrival of a stepmother a year later. The details of Sarah's character have been invented, but this novel provides real insight into Abraham Lincoln's childhood, as well as the role of women on the frontier.

▼▲
Harry Mazer is the author of many books for young readers, including Please, Somebody Tell Me Who I Am; My Brother Abe; the Boy at War trilogy; The Wild Kid; The Dog in the Freezer; The Island Keeper; and Snow Bound. His books have won numerous honors, including a Horn Book honor and an American Library Association Best Book for Young Adults citation. Along with his wife, Norma Fox Mazer, Harry received an ALAN award in 2003 for outstanding contribution to adolescent literature. He lives in Montpelier, Vermont.

▼▲
Drawing on a limber imagination and knack for storytelling, Mazer (Boy at War; Heroes Don't Run) turns a few facts from Abraham Lincoln's childhood into a vivid historical novel. The title notwithstanding, the future president does not occupy center stageAbe's older sister, Sally, about whom little is known, serves as the personable narrator and protagonist. Mazer conjures her as tomboyish and outspoken, a bit like Laura Ingalls but saddled with an authoritarian, fault-finding father. The dramas of frontier life quickly prove absorbing: shortly after the book opens, a land dispute forces the Lincolns to leave their Kentucky farm, and they settle in more isolated, primitive quarters in Indiana. Contemporary readers will easily relate to Sally, who can't understand why her patient, religious mother always agrees with Mr. Lincoln (as his wife addresses him), and whose grief over her mother's death makes her resent the essentially kind widow her father marries a year later. Fans of historical novels will savor the details evoked here. Ages 812. (Jan.) Copyright 2009 Reed Business Information.

▼▲
I'm the author/artist and I want to review My Brother Abe: Sally Lincoln's Story - eBook.
Back
Back