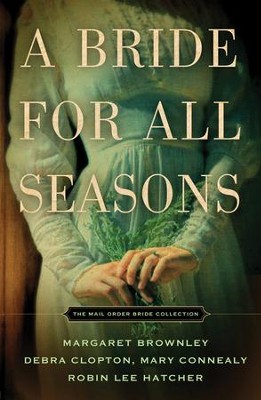 A Bride for All Seasons

▼▲
Four mail-order bride romances! After Tom's brother is murdered, Mary-Jo shows up claiming she married his brother by proxy. Could Matt be desperate enough to accept Bible-thumping Ellie? Luvena is a singing sensation, and Clay owns an abandoned theater---a perfect match? And when Megan responds to David's ad, she doesn't realize he's a dying man! 400 pages, softcover from Nelson.

It all started with an ad in a mail-order bride catalogue . . .

This charming bouquet of novellas introduces you to four Hitching Post Mail-Order Bride Catalogue prospects in the year 1870, all eager for second chances . . . and hungry for happiness. Year in, year out, they’ll learn that love often comes in unexpected packages.

"And then Came Spring" by Margaret Brownley

Mary-Jo has traveled halfway across the country to meet her match, arriving just in time for his funeral. Returning home seems like her only option until her would-be brother-in-law proposes a more daring idea.

"An Ever After Summer" by Debra Clopton

Ellie had no idea she’s not what Matthew ordered. And what’s wrong with being a "Bible thumper" anyway? She’s determined to show him she’s tougher than she looks—and just the girl he needs.

Luvena would be perfect for Clay if she didn’t come with kids. But kids are a deal breaker, especially in a rough-and-trouble mining town. &shy; e trouble is, there’s no money to send them back . . .

David’s convinced he’s not long for the world. He needs someone to mother his boys when he’s gone—nothing more. Can plucky Irish Megan convince him to work at living instead of dying?

▼▲
New York Times best-selling author Margaret Brownley has penned more than twenty-five historical and contemporary novels. Her books have won numerous awards, including Reader’s Choice.Though successful, Margaret decided to leave behind the secular publishing world to follow God’s will for her: to write inspirational fiction. Since then she has published the Rocky Creek series and A Lady Like Sarah was a Romance Writers of America RITA finalist.Happily married to her real life hero, Margaret and her husband have three grown children and live in Southern California.

▼▲
I'm the author/artist and I want to review A Bride for All Seasons.
Back
Back