Skip to main content
SPRING CYBER EVENT STARTS NOW: And it's a really BIG deal! Up to 88% off through 5/24>
Breath of Life: Three Breaths that Shaped Humanity
By: Daniel Kooman
Stock No: WW854862 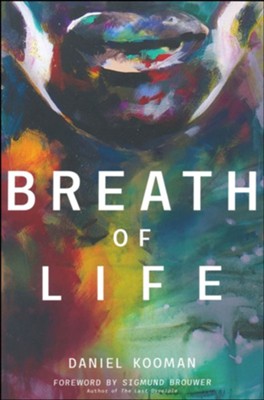 The world began when God, the Creator of everything said, "Let there be light." As the wonder of the world came to life with all its intricate beauty, the most miraculous moment had yet to become reality. That’s when God breathed into Adam and, with that one breath, shaped humanity.

In this thoughtful and inspiring book, Daniel Kooman, the award-winning director of She Has a Name and Dream: Find Your Significance, shares the creation story in a way you have never experienced it before. Breath of Life examines three breaths from God that shaped humanity: The first breath that brought humanity to life; a second breath that redeemed humanity from sin; and a third breath that continues to shape the course of human history as we know it. Original and inspiring, it helps readers rethink something they take for granted every waking moment of the day: the very breath in their lungs.

▼▲
Daniel Kooman is an award-winning film producer who has travelled to more than thirty countries to tell stories that challenge and inspire. His work has been featured on platforms such as The Huffington Post, the BBC, Newswire and ABC, amongst many other international, national and local podcasts, journals, magazines and newspapers. Storytelling has become a platform for Daniel and his wife Christy to invest in children, empowering orphans in Tanzania and restoring hope to young women trafficked in Thailand. He produces films for Unveil Studios alongside his brothers Matthew and Andrew, and is the director of the feature film She Has A Name (Amazon Video) and the documentary series Dream: Find Your Significance (Amazon, Christian Cinema). Daniel and his wife Christy live on Vancouver Island, Canada with their daughter, Rosie and son, Judah.

▼▲
"This book is a treasure. Daniel takes us on an important journey that leads us deeper into the inner courts of our relationship with God. Powerful!"- Trevor McNevan, Singer & Songwriter, Thousand Foot Krutch (TFK)


"Daniel’s revelation and theology are far more profound than anything I’ve yet encountered. This book will challenge you to go deeper in your studies while simultaneously bringing you closer to God."-Brittni De La Mora, Pastor & Author of Fresh and Fire


"Oftentimes we only read the Scriptures superficially. Daniel’s book takes us deep inside the Biblical creation account helping us to find application in it for our lives today."-Rabbi K.A. Schneider, Author of The Book of Revelation Decoded


"I was most impacted by the deep revelation this book unveils around breath, which reminds us how quintessential the moment truly was when Yahweh breathed on Adam in the Garden of Eden. Breath changes everything. I foresee that the power of Daniel’s thoughts and stories shared in this book will have a wonderful impact in the lives of readers."-Sigmund Brouwer, Author of The Last Disciple & The Weeping Chamber

▼▲
I'm the author/artist and I want to review Breath of Life: Three Breaths that Shaped Humanity.
Back
Back