Skip to main content
CYBER WEEK SALE! Spot great deals up to 88% off. >
What Is a Girl Worth? My Story of Breaking the Silence and Exposing the Truth About Larry Nassar and USA Gymnastics
By: Rachael Denhollander
Stock No: WW441339 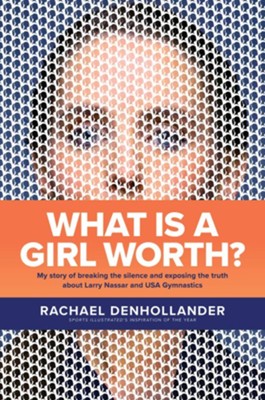 What Is a Girl Worth? My Story of Breaking the Silence and Exposing the Truth About Larry Nassar and USA Gymnastics

▼▲
Go behind the headlines with Rachael Denhollander---the first public accuser of former U.S.A. Gymnastics team doctor Larry Nassar. Revealing her full story for the first time, Denhollander shines a light on the physical and emotional impacts of abuse, why so many survivors are reluctant to speak out, what it means to be believed, and more. 347 pages, hardcover from Tyndale.

▼▲
Written by Rachael Denhollander, recipient of Sports Illustrated’s Inspiration of the Year Award and one of Time’s 100 Most Influential People (2018).

Rachael Denhollander’s voice was heard around the world when she spoke out to end the most shocking USA gymnastics scandal in history. The first victim to publicly accuse Larry Nassar, the former USA Gymnastics team doctor who sexually abused hundreds of young athletes, Rachael now reveals her full story for the first time. How did Nassar get away with it for so long? How did Rachael and the other survivors finally stop him and bring him to justice? And how can we protect the vulnerable in our own families, churches, and communities?

What Is a Girl Worth? is the inspiring true story of Rachael’s journey from an idealistic young gymnast to a strong and determined woman who found the courage to raise her voice against evil, even when she thought the world might not listen. In this crucial cultural moment of #MeToo and #ChurchToo, this deeply personal and compelling narrative shines a spotlight on the physical and emotional impact of abuse, why so many survivors are reluctant to speak out, and what it means to be believed.

▼▲
Rachael Denhollander was the first survivor to expose Larry Nassar’s sexual abuse and the last to give a victim impact statement regarding his serial molestation. Her What Is a Girl Worth? is a mature, resolute Christian memoir that lends vital perspective to abuse and institutional cover-ups.

Denhollander details her childhood and upbringing; her visits to a Michigan State University clinic as a teen; Nassar’s assaults at the clinic; and her road toward speaking out in 2016, months before the #MeToo movement gathered momentum.

The long term consequences of Nassar’s betrayal are drawn in a clear-eyed way. Denhollander’s pain balances with a tender portrait of her husband and family. Her intelligent reflections reveal a woman of faith who chose to sacrifice her privacy and to seek justice with love and determination that no child face the same pain. Separating her own future happiness and healing from the outcome of the trial, she presents peace as possible. Hers is a compelling viewpoint that isn’t imposed as a solution for all survivors.

Also an attorney, Denhollander elucidates the steps she took to bring her case to MSU police. From the first suspicion that Nassar’s treatments were anything but medical to his sentencing, the cruel realities of her survival thread with advocacy and everyday motherhood. Nassar is drawn as the thorough, renowned doctor, making his abuse even more chilling.

Treating a sensitive topic with unflinching truth, respect, and fair-mindedness, What Is a Girl Worth? fuses biblical notions with legal insights, personal journal entries, and heartbreaking data to make a lucid argument regarding the power of a single voice to inspire a chorus.
Starred review. In this powerful debut, attorney and former gymnast Denhollander tells of her life leading to the 2018 conviction of sexual predator Larry Nassar, a sports physician associated with Michigan State University and the USA Gymnastics team who molested the author and more than 200 other girls. Raised in Kalamazoo, Mich., Denhollander was homeschooled, deeply religious, and aspired to become a lawyer. “Gangly” and 5'6," she didn’t fit the profile of a gymnast but was placed on her gym’s competitive team; after sustaining a lower-back injury at age 15, she was sent to Nassar, who would—under the guise of treatment, without gloves, and without consent—vaginally penetrate her with his fingers. She reported the abuse to her coaches, but, she writes, they didn’t believe her; nearly 16 years later when another gymnast’s story of abuse by a coach broke, Denhollander decided to speak out again, eventually leading to Nassar’s indictment and conviction. Denhollander reveals her anguish and emotional pain, her feelings of helplessness (“How do I even try to heal from something, when I don’t even know what that ‘something’ is?”). Denhollander’s brave and detailed memoir serves as a clear-eyed look into a disturbing case of sexual abuse that gained national attention.
Starred Review. Denhollander, now an attorney and activist, was the first to share her story publicly when the 2016 USA gymnastics sexual abuse scandal broke. Her authorial debut reveals how she was groomed and abused as a young gymnast, in plain view of an unsuspecting parent, and how she and other survivors brought serial molester Larry Nassar to justice. Reaching beyond her own narrative, Denhollander explores why victims of sexual assault often stay silent; she also describes Nassar’s trial in detail and examines the safety nets that failed to protect her and hundreds of his other victims. Her memoir is straightforward and deeply honest about the betrayal she endured yet hopeful for growing awareness and healing. Drawing on her law background and faith-based strength, the former gymnast advocates for positive action against abuse, with her own experiences as the inspirational framework. VERDICT: Essential for sports fans and all readers concerned with the ongoing, widespread challenges of abuse and accountability. Denhollander’s story of empowerment deserves wide readership.

▼▲
I'm the author/artist and I want to review What Is a Girl Worth? My Story of Breaking the Silence and Exposing the Truth About Larry Nassar and USA Gymnastics.
Back
Back