Skip to main content
OUR BIGGEST BARGAIN SALE EVER: Over 6,000 deals at never-seen-before prices ~ through 8/23. Shop now >
Breaking the Islam Code: Understanding the Soul Questions of Every Muslim
By: J.D. Greear
Stock No: WW926386 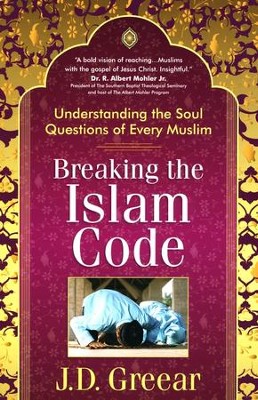 Breaking the Islam Code: Understanding the Soul Questions of Every Muslim

▼▲
Gain profound insight into the ways Muslims think, feel, and believe so you can effectively present the gospel! Empowering and insightful, Greear's guide transcends traditional apologetics to help you understand Islamic culture and religion. Discover how to avoid offending your Muslim neighbors, form friendships, and respectfully turn objections into opportunities to share your faith.

This insightful, reader-friendly book transcends traditional apologetics. It helps Christians understand what is deep in Muslims’ hearts, behind their theology—which will lead to friendship and effective communication; respectfully turn many of the primary objections into opportunities to share the faith; and avoid unnecessarily offending Muslims they’re interacting with.

J.D. Greear, PhD, is lead pastor of a large and growing church in the Raleigh-Durham area of North Carolina and is deeply committed to international church planting. He lived and worked for two years among Muslims in Southeast Asia before studying Christian and Islamic theology. J.D. lives with his family in North Carolina. Breaking the Islam Code is his first book for Harvest House.

▼▲
Ask of Me, and I will give you the nations for your inheritance, and the ends of the earth for your possession. (Psalm 2:8) Gods promise to the Son in this passage can seem nearly unattainable, especially when dealing with Muslims, but J. D. Greear offers help in Breaking the Islam Code.

Greear, who lived and worked among Muslims in Southeast Asia before becoming a pastor in North Carolina, explains what Muslims believe, which is common among books about Islam. However, he doesnt stop there but takes the reader into what moves them and what their objections to the Gospel are. Beyond that, he discusses what aspects of the Gospel appeal to them, aspects that differ from Western Christians. Especially interesting is his use of the arguments of the early church fathers in witnessing to Muslims. He also deals with Muslims objections to various perceptions of Christian doctrines and lifestyles.

Greear does make a few statements that I would disagree with, such as: The Apostle Paul was a great example of a religiously zealous man who hated God (p. 99). This statement was in relation to someones feeling that their uncertainty about measuring up to Gods commands makes them resentful of that God. Statements like that are rare and infrequent.

The author challenges readers to intercessory prayer for Muslims and for self-sacrifice in the Romans 12: 1 sense to reach Muslims. At the end he lists additional resources which include both books and websites that appear quite helpful. He also adds a chapter on different approaches to winning Muslims in Muslim countries, or living as a completed Muslim, and the problems and weaknesses of some of the approaches. Its both challenging and thought provoking.

Greear writes in a straightforward, practical, personable style with anecdotes and Scripture. The book is easy to read and quite interesting, not in the least stodgy and not too theological for the average Christian. Ive reviewed probably a dozen books on various aspects of Islam, some excellent, some harder to read, but Greears deals more directly with witnessing and winning Muslims than most of the others. This may be a good book for a Sunday school class to study in an area with numerous Muslims, or for any individual with opportunities to talk with Muslims about the Lord. I highly recommend this to anyone wishing to witness to Muslims.  Debbie W. Wilson, www.ChristianBookPreviews.com

“J.D. Greear is a faithful pastor with a bold vision of reaching all persons—and specifically Muslims—with the gospel of Jesus Christ. His analysis of this challenge is insightful and the clarity of his gospel witness shines through.”
—Dr. R. Albert Mohler Jr., President of The Southern Baptist Theological Seminary and author of numerous books

“Dr. Greear was successful in his ministry to Muslims in Indonesia, and this book is a distillation of what he learned…There is no book that exceeds this one in terms of theological depth wedded to practical savvy.”
—Dr. Bruce Ashford, Director of the Center for Great Commission Studies at Southeastern Baptist Theological Seminary

“Your book…has helped me communicate much more effectively with Muslims who are seeking the Truth. Now, rather than arguing with my Muslim friends, I end up sharing with them at deeper levels with words and ideas that they can understand and that are found in Scripture from Genesis to Revelation…This book has completely revolutionized the way I share the gospel with Muslims.”
—Patrick F., missionary to Afghanistan

“The hard work of engaging Muslims, gaining insight into their mind-set and heartfelt spiritual quest, then applying…Scripture to their needs is evident throughout this book…Valuable reading for those engaging Muslims in a variety of settings.”
—Keith Eitel, Director of Missions at Southwestern Baptist Theological Seminary

“Practical advice for engaging the Islamic culture in conversations of the cross. My time studying Islam…would have had minuscule effect with my Muslim friends had it not been for the guidance…in this book. Thank you for this wonderful tool!”
—Lance Michels, seminary student and missionary to Southeast Asia

“If you love Jesus and Muslims you will love this book.”
—Mark Driscoll, pastor of Mars Hill Church, president of the Acts 29 Church Planting Network and president of The Resurgence

“Rarely have I been so moved by the clarity, freshness, and effectiveness of any contribution…to reaching our world in our time…the way Breaking the Islamic Code moved me. This...approach trumps any I have seen on the bottom line, which is actually reaching Muslims with the gospel.
—Alvin Reid, Bailey Smith Chair of Evangelism, Southeastern Baptist Theological Seminary, and author of Inside the Mind of the Radically Unchurched

▼▲
I'm the author/artist and I want to review Breaking the Islam Code: Understanding the Soul Questions of Every Muslim.
Back
Back