Breaking Generational Curses: Overcoming the Legacy of Sin in Your Family - eBook
By: Marilyn Hickey 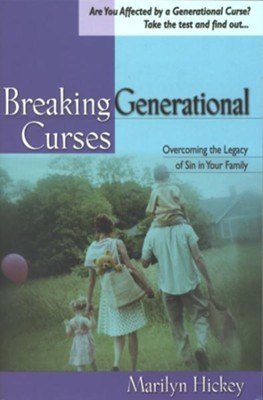 Breaking Generational Curses: Overcoming the Legacy of Sin in Your Family - eBook

▼▲
Negative behavior patterns in our families find their roots in our spiritual heritage. In this book, the author speaks to the past and masterfully illustrates how to overcome it through the power of Christ. Filled with practical examples, Marilyn Hickey guides you to peace with your past by identifying areas of needed change.

▼▲
Take the Test! Do you or someone in your family... This could be a Generational Curse... Now is the time to shatter the past and take control of the future! A Generational Curse involves negative patterns from your family history that are repeated in your own life. However, God's plan for you is a better future! You can overcome these curses of the past by utilizing the powerful lessons and worksheets in this book. Take the complete version of the test inside, then walk step by step with international author Marilyn Hickey through identifying and breaking the Generational Curse in your life!

▼▲
Marilyn Hickey is no stranger to impacting the lives of millions worldwide. As founder and president of Marilyn Hickey Ministries, Mariyn is being used by God to help cover the earth with the Word. Her mission has been effectively accomplished through various avenues of ministry such as partnering with other ministries to ship thousands of Bibles into Communist countries; holding crusades in places like Ethiopia, the Philippines, Korea, Haiti, Brazil, Malaysia, Japan, and Honduras; and reaching individuals worldwide through television broadcasts seen on networks such as Black Entertainment Network (BET) and Trinity Broadcasting Network (TBN). In addition, Marilyn Hickey Ministries has established a fully accredited 2-year Bible college to raise up Christian leaders to carry out God s mission. Marilyn also serves the body of Christ as the Chairman of the Board of Regents for Oral Roberts University, and is the only woman serving on the Board of Directors for Dr. Davie Yonggi Cho (pastor of the world s largest congregation, Yoido Full Gospel Church.) In addition to her ministry, Marilyn is also a busy wife and mother of two grown children. She is married to Wallace Hickey, pastor of Orchard Road Christian Center in Greenwood Village, Colorado.

▼▲
I'm the author/artist and I want to review Breaking Generational Curses: Overcoming the Legacy of Sin in Your Family - eBook.
Back
×
Back
×