Skip to main content
A Brave Vessel: The True Tale of the Castaways Who Rescued Jamestown - eBook
By: Hobson Woodward
Stock No: WW47034EB 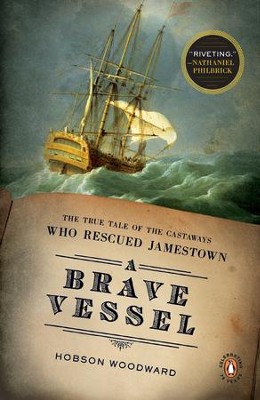 A Brave Vessel: The True Tale of the Castaways Who Rescued Jamestown - eBook

▼▲
"At once a penetrating work of literary analysis and a riveting historical narrative." -Nathaniel Philbrick

Merging maritime adventure and early colonial history, A Brave Vessel charts a little-known chapter of the past that offers a window on the inspiration for one of Shakespeare's greatest works. In 1609, aspiring writer William Strachey set sail for the New World aboard the Sea Venture, only to wreck on the shores of Bermuda. Strachey's meticulous account of the tragedy, the castaways' time in Bermuda, and their arrival in a devastated Jamestown, remains among the most vivid writings of the early colonial period. Though Strachey had literary aspirations, only in the hands of another William would his tale make history as The Tempest-a fascinating connection across time and literature that Hobson Woodward brings vividly to life.

▼▲
Hobson Woodward is associate editor of the Adam Papers at the Massachusetts Historical Society. He lives near Boston.

"Like Shakespeare before him, Hobson Woodward...excels at using his source materials to produce a richly textured adventure story...If you're interested in Jamestown, shipwrecks or Shakespeare, you'll want...this book"
-Minneapolis Star Tribune

"[A] fruitful combination of literature and history."
-Booklist

"On the 400th anniversary of the Sea Venture's wreck on Bermuda, Hobson Woodward recounts the events and personalities of the voyage, the island refuge, and the early Jamestown Colony. He tells the story with accuracy and verve, and makes a compelling case for Shakespeare's indebtedness to William Strachey when writing The Tempest. Woodward's Brave Vessel is learned, lucid, and engrossing."
-Alden Vaughan, Professor emeritus of History at Columbia University and coeditor of the Arden edition of The Tempest

"A Brave Vessel is a real-life story of heroism and human ambition as thrilling as any Hollywood fiction. Injecting popular history with a wealth of little-known detail, it traces a fascinating story of unlikely survival-and the impact a single, freak event in the mid-Atlantic had on the fortunes of America's birthplace and the world's greatest playwright. Woodward immerses us in the mindset of 17- century colonists and the immense challenges and tragedies of their endeavor. He entwines true events with their literary spin-offs, and in doing so, brings both to life."
-Rosemary Jones, author, Bermuda: Five Centuries

▼▲
I'm the author/artist and I want to review A Brave Vessel: The True Tale of the Castaways Who Rescued Jamestown - eBook.
Back
Back