BIG SUMMER BLOWOUT: 3 Days Only! Save up to 90% thru Wednesday. Shop now >
125 Brain Games for Toddlers and Twos
By: Jackie Silberg 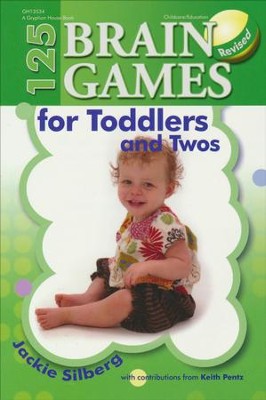 125 Brain Games for Toddlers and Twos

A young child’s brain grows at a phenomenal rate in the first years of life. Revised and updated to reflect the latest research on how children learn, 125 Brain Games for Toddlers and Twos is packed with everyday opportunities to contribute to brain development. Each game is accompanied by an annotation on the latest brain research and how the activity promotes brain power in the critical period from twelve to thirty-six months.

Jackie Silberg is an early childhood advocate and popular keynote speaker. She is the author of more than a dozen best-selling books for teachers and parents.

▼▲
Jackie Silberg, who has an M.S. in child development, is an early childhood advocate and popular keynote speaker. She received the Distinguished Alumna Award from Emporia State University, recognizing her current achievements as well as her long and prolific career. Jackie founded and directed the Jewish Community Center School of Music in Kansas City, Missouri, and worked for Channel 41 television, planning the music and performing her original music for a children's program called "41 Treehouse Lane." She wrote and produced a television show for Time Warner called "Just Kids," which addressed children's needs and interests. Jackie has worked as a consultant with the Discovery Channel, setting up their music streaming website. She has given workshops, keynote addresses, seminars, and family concerts throughout the U.S., Canada, Australia, Germany, and in Singapore. Jackie has served as an adjunct instructor at both Emporia State University and the University of Missouri at Kansas City and lectures at Johnson County Community College. Jackie is the owner of Miss Jackie Music Company.

▼▲
"This book gives some great ideas on how to involve your toddler in activities to enhance brain development. I feel like it guided me to the appropriate activities for my 2 year-old son. It helps me to know what level he's at so that I can challenge him, and he's always so proud when he understands an activity and can play along." – 2012 Mom’s Best Award Panel

"This book is useful for moms and toddlers. I liked the variety of games from music to counting to active games for kids of a wide age range." – 2012 Mom’s Best Award Panel

"I liked that it was simple to just pick up and use, and happily even my older children could use some of the ideas for interacting with their young siblings. Sometimes I'll find it hard to think of activities in the middle of a day, or I get stuck in a rut with activities, so it was nice to just leaf through and find something quickly that I could try with my toddler." – 2012 Mom’s Best Award Panel

▼▲
I'm the author/artist and I want to review 125 Brain Games for Toddlers and Twos.
Back
×
Back
×