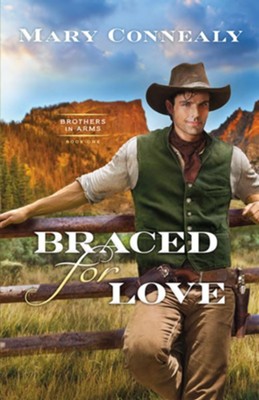 ▼▲
Left with little back in Missouri, Kevin Hunt takes his younger siblings on a journey to Wyoming when he receives news that he's inheriting part of a ranch. The catch is that the ranch is also being given to a half brother he never knew existed. Turns out, Kevin's supposedly dead father led a secret and scandalous life.

But danger seems to track Kevin along the way, and he wonders if his half brother, Wyatt, is behind the attacks. Finally arriving at the ranch, everyone is at each other's throats and the only one willing to stand in between is Winona Hawkins, a nearby schoolmarm.

Despite being a long-time friend to Wyatt, Winona can't help but be drawn to the earnest, kind Kevin--and that puts her in the cross hairs of somebody's dangerous plot. Will they all be able to put aside their differences long enough to keep anyone from getting truly hurt?

▼▲
Mary Connealy writes "romantic comedies with cowboys" and is celebrated for her fun, zany, action-packed style. She has sold more than half a million books. She is the author of the popular series Brides of Hope Mountain, High Sierra Sweethearts, Kincaid Brides, Trouble in Texas, Lassoed in Texas, Sophie's Daughters, and many other books. Mary lives on a ranch in eastern Nebraska with her very own romantic cowboy hero. Learn more at www.maryconnealy.com.

▼▲
I'm the author/artist and I want to review Braced for Love #1.
Back