Skip to main content
Boys of Wartime: Will at the Battle of Gettysburg - eBook
By: Laurie Calkhoven
Stock No: WW48042EB 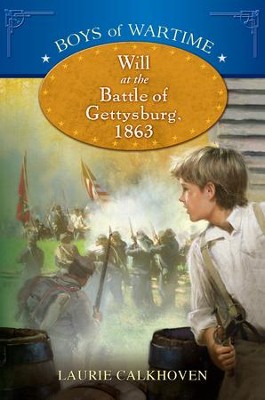 Boys of Wartime: Will at the Battle of Gettysburg - eBook

▼▲
Twelve-year-old Will has always wanted to be a drummer for the Union Army, but now the Confederate rebels have occupied his hometown of Gettysburg, Pennsylvania making Will wonder if he is ready for battle. When he is given an important task from a Union colonel, will he risk his life? A fictional account based upon the experiences of two real-life individuals.

Twelve-year-old Will wants to be a drummer in the Union army, but he's stuck far from the fighting in his sleepy hometown of Gettysburg, Pennsylvania. Then the Union and Confederate armies meet in Gettysburg, and Will and his family are caught up in the ferocious fighting. From delivering important messages and helping captured slaves escape Confederate soldiers to even saving a young soldier's life, Will takes readers on a journey through one of the Civil War's most significant battles. And when the fighting is finally over, Will witnesses President Lincoln deliver his famous Gettysburg Address, and he knows firsthand the truth behind his words.

▼▲
I'm the author/artist and I want to review Boys of Wartime: Will at the Battle of Gettysburg - eBook.
Back
Back