Skip to main content
CYBER MONDAY IS HERE! Shop savings up to 88%. >
The Bounty: The True Story of the Mutiny on the Bounty - eBook
By: Caroline Alexander
Stock No: WW47886EB 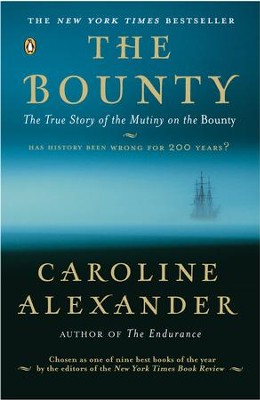 The Bounty: The True Story of the Mutiny on the Bounty - eBook

▼▲
Has history been wrong for 200 years? Read the startling truth about the mutiny on the Bounty, its characters, causes, and aftermath. Television rights are now in development with Ridley Scott's Scott Free Productions.

More than two centuries after Master’s Mate Fletcher Christian led a mutiny against Lieutenant William Bligh on a small, armed transport vessel called Bounty, the true story of this enthralling adventure has become obscured by the legend. Combining vivid characterization and deft storytelling, Caroline Alexander shatters the centuries-old myths surrounding this story. She brilliantly shows how, in a desperate attempt to save one man from the gallows and another from ignominy, two powerful families came together and began to create the version of history we know today. The true story of the mutiny on the Bounty is an epic of duty and heroism, pride and power, and the assassination of a brave man’s honor at the dawn of the Romantic age.

▼▲
Caroline Alexander is the author of the New York Times bestseller The Endurance as well as four other books. She has written for The New Yorker, Granta, Cond&eacute; Nast Traveler, Smithsonian, Outside, and National Geographic.

▼▲
"Alexander's vigorous retelling in ''The Bounty'' leads to lots of vigorous rethinking." -- The New York Times

▼▲
I'm the author/artist and I want to review The Bounty: The True Story of the Mutiny on the Bounty - eBook.
Back
Back