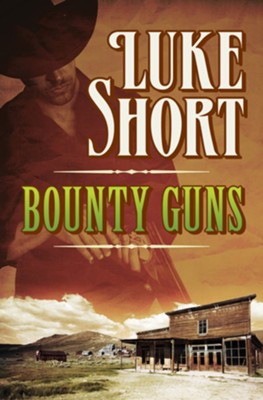 ▼▲
Hired to find a killer, a drifter rides into a deadly family feud, in this action-packed novel from an award-winning storyteller of the West.

For $10,000, Tip Woodring must ride into a frontier town full of murderers and find one particular killer. The deal—offered by Rig Holman, a saloon owner who liked the way Woodring knocked out a nasty drunk in front of his bar—could make him a fortune . . . or cost him his life.

Last spring, a prospector named Blackie Mayfell walked into Holman’s office with $15,000 in gold and a strange proposition. He asked Holman to keep the money and get it to his daughter if he died, handing over a little extra for insurance. Then Mayfell was slain by someone who wanted a piece of his claim. Holman wants to know who pulled the trigger, and Woodring will find out—or die trying.

▼▲
Luke Short is the pen name of Frederick Dilley Glidden (1908–1975), the bestselling, award-winning author of over fifty classic western novels and hundreds of short stories. Renowned for their action-packed story lines, multidimensional characters, and vibrant dialogue, Glidden’s novels sold over thirty million copies. Ten of his novels, including Blood on the Moon, Coroner Creek, and Ramrod, were adapted for the screen. Glidden was the winner of a special Western Heritage Trustees Award and the Levi Strauss Golden Saddleman Award from the Western Writers of America.

Born in Kewanee, Illinois, Glidden graduated in 1930 from the University of Missouri where he studied journalism.  After working for several newspapers, he became a trapper in Canada and, later, an archaeologist’s assistant in New Mexico. His first story, "Six-Gun Lawyer," was published in Cowboy Stories magazine in 1935 under the name F. D. Glidden. At the suggestion of his publisher, he used the pseudonym Luke Short, not realizing it was the name of a real gunman and gambler who was a friend of Doc Holliday and Wyatt Earp. In addition to his prolific writing career, Glidden worked for the Office of Strategic Services during World War II. He moved to Aspen, Colorado, in 1946, and became an active member of the Aspen Town Council, where he initiated the zoning laws that helped preserve the town.

▼▲
I'm the author/artist and I want to review Bounty Guns - eBook.
Back
×
Back
×