Skip to main content
WINTER BIBLE SALE: Over 1,200 Deals Up to 80% Off, thru 2/1. Shop Now >
Boundless Faith: The Global Outreach of American Churches
By: Robert Wuthnow
Stock No: WW268081 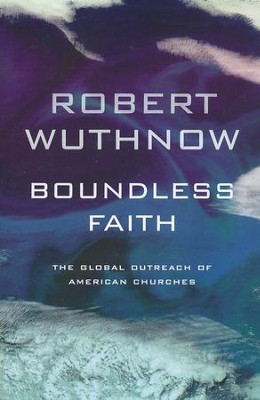 ▼▲
In Boundless Faith, the first book to look systematically at American Christianity in relation to globalization, Robert Wuthnow shows that American Christianity is increasingly influenced by globalization and is, in turn, playing a larger role in other countries and in U.S. policies and programs abroad. These changes, he argues, can be seen in the growth of support at home for missionaries and churches in other countries and in the large number of Americans who participate in short-term volunteer efforts abroad.

These outreaches include building orphanages, starting microbusinesses, and setting up computer networks. Drawing on a comprehensive survey that was conducted for this book, as well as several hundred in-depth interviews with church leaders, Wuthnow refutes several prevailing stereotypes: that U.S. churches have turned away from the global church and overseas missions, that congregations only look inward, and that the growing voice of religion in areas of foreign policy is primarily evangelical. This fresh and revealing book encourages Americans to pay attention to the grass-roots mechanisms by which global ties are created and sustained.

▼▲
I'm the author/artist and I want to review Boundless Faith: The Global Outreach of American Churches.
Back
Back