Bound for the Promised Land: Harriet Tubman: Portrait of an American Hero
By: Kate Clifford Larson 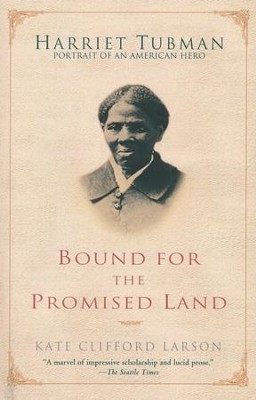 Bound for the Promised Land: Harriet Tubman: Portrait of an American Hero

By: Kate Clifford Larson
One World/Ballantine / 2004 / Paperback
Write a Review
In Stock
Stock No: WW456283

▼▲
In this long-overdue biography, historian Kate Clifford Larson gives us a powerful, intimate, meticulously detailed portrait of Tubman and her times. Drawing from a trove of new documents and sources as well as extensive genealogical data, Larsen reveals Tubman as the complex woman she was--brilliant, shrewd, deeply religious, and passionate in her pursuit of freedom.

▼▲
The essential, "richly researched"* biography of Harriet Tubman, revealing a complex woman who "led a remarkable life, one that her race, her sex, and her origins make all the more extraordinary" (*The New York Times Book Review).

Harriet Tubman is one of the giants of American history—a fearless visionary who led scores of her fellow slaves to freedom and battled courageously behind enemy lines during the Civil War. Now, in this magnificent biography, historian Kate Clifford Larson gives us a powerful, intimate, meticulously detailed portrait of Tubman and her times. Drawing from a trove of new documents and sources as well as extensive genealogical data, Larson presents Harriet Tubman as a complete human being—brilliant, shrewd, deeply religious, and passionate in her pursuit of freedom. A true American hero, Tubman was also a woman who loved, suffered, and sacrificed.

Praise for Bound for the Promised Land

"[Bound for the Promised Land] appropriately reads like fiction, for Tubman’s exploits required such intelligence, physical stamina and pure fearlessness that only a very few would have even contemplated the feats that she actually undertook. . . . Larson captures Tubman’s determination and seeming imperviousness to pain and suffering, coupled with an extraordinary selflessness and caring for others."—The Seattle Times

"Essential for those interested in Tubman and her causes . . . Larson does an especially thorough job of . . . uncovering relevant documents, some of them long hidden by history and neglect."—The Plain Dealer

"Larson has captured Harriet Tubman’s clandestine nature . . . reading Ms. Larson made me wonder if Tubman is not, in fact, the greatest spy this country has ever produced."—The New York Sun

▼▲
Kate Clifford Larson has spent years researching the life and times of Harriet Tubman. She earned her doctorate at the history department of the University of New Hampshire. A graduate of Simmons College and Northeastern University, Larson has won numerous academic awards and fellowships in support of her work. This is her first book. She lives in Winchester, Massachusetts.

▼▲
"Compelling . . . memorable . . . Tubman [takes] her rightful place as a visionary and a selfless leader."—USA Today

"It is a risky business to tamper with a national icon and trickier still to convey the full dimension of the individual behind the legend. But Kate Clifford Larson has accomplished both in her brilliant biography."—Smithsonian Magazine

"Epic . . . written with passion for the subject and meticulous attention to detail . . . [Larson’s] book is nothing less than an encyclopedic chronicle of a rip-roaring American adventure."—The San Antonio Express-News

"Skillfully written . . . Larson’s book includes several maps that help readers understand the workings of the Underground Railroad. . . . Larson present[s] a richly drawn portrait of Tubman as a deeply spiritual woman, a ’Moses’ and ’Joan of Ark’ as contemporaries were wont to describe her."—The Charlotte Observer

"Mesmerizing and exceedingly well-documented . . . As Larson recounts in absorbing incident after absorbing incident, the brilliant Harriet Tubman was courageous, witty, and as determined as a body could be."—Bay State Banner

"A marvel of impressive scholarship and lucid prose."—The Seattle Times

"Although Tubman’s life story has been told before, it has never been told in such a comprehensive way."—(Salt Lake City) Deseret Morning News

"Larson’s thorough and readable effort is a must for armchair historians who haven’t looked at Tubman in a while, if ever."—Cape Cod Times

▼▲
I'm the author/artist and I want to review Bound for the Promised Land: Harriet Tubman: Portrait of an American Hero.
Back
×
Back
×