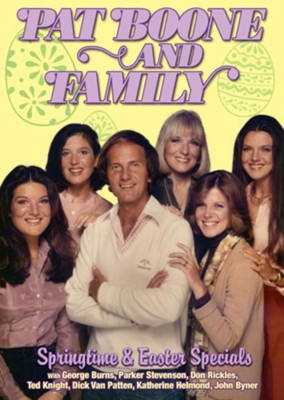 A Pair of Musical, Fun-Filled Family Celebrations with Pat, Debby & The Boones!

Pat Boone became one of the biggest singing stars of the 1950s and 1960s with a string of hit songs (Love Letters In The Sand, April Love) that rank him in the top ten recording artists of all time. In addition to a successful movie career, Pat Boone became the youngest performer to host his own television variety show (Pat Boone's Chevy Showroom, 1957-1960) and in 1978 brought his four singing daughters Debby, Cherry, Lindy and Laurie along with wife Shirley to ABC-TV for a series of seasonal specials.

Pat Boone & Family Springtime Special welcomes guests Parker Stevenson (The Hardy Boys Mysteries), Dick Van Patten (Eight Is Enough), The Unknown Comic and cameo appearances by comedians George Burns and Don Rickles. Pat performs a heart-warming You & Me Against The World to his grandson, Debby and Parker duet on Love Story, the Boone sisters hit the dance floor and the entire family teams up for (Your Love Has Lifted Me) Higher & Higher.

Pat Boone & Family Easter Special celebrates the holiday at home as the Boones welcome fellow ABC-TV stars Ted Knight (Too Close For Comfort) and Katherine Helmond (Soap) in addition to comic John Byner. The family roller skates on location in Los Angeles while singing Ease On Down The Road, the Boone girls perform If They Could See Me Now while showcasing their choreography skills and the join their parents for an emotional finale with Let There Be Peace On Earth.

▼▲
I'm the author/artist and I want to review Pat Boone and Family: Springtime & Easter Specials.
Back
×