Skip to main content
BIG SUMMER BLOWOUT: Over 2,000 deals ~ up to 85% off, through 8/16. Shop now >
The Seven Books of History Against the PagansShort-Run Repri Edition
Translated By: Roy J. Deferrari
By: Paulus Orosius
Stock No: WW213109 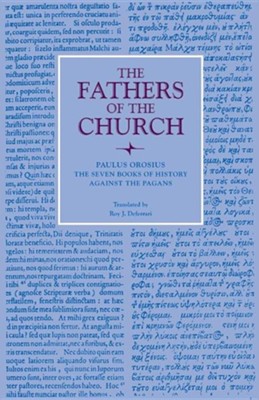 The Seven Books of History Against the PagansShort-Run Repri Edition

Translated By: Roy J. Deferrari
By: Paulus Orosius
More in Fathers of the Church Patristic Series
Catholic University of America Press / 1964 / Paperback
Write a Review
In Stock
Stock No: WW213109
Buy Item Our Price$45.00
In Stock
Quantity:
Stock No: WW213109
Catholic University of America Press / 1964 / Paperback
Quantity:
Add To Cart
of These in Your Cart

▼▲
Orosius wrote the first Christian Universal History, ""Historiarum adversus paganos libri septem."" It has been thought to be a supplement to the ""City of God,"" ""Civitate Dei,"" especially the third book, in which St. Augustine attempts to prove that the Roman Empire suffered as many disasters before as after Christianity was received. It was a common argument among the pagans that the abandonment of the worship of their deities had led to the general break-up of the Roman Empire and all its attendant evils. St. Augustine was annoyed by the persistence of this argument and hoped that a history of all the known people of antiquity, with the fundamental idea in mind that God determines the destinies of nations, would put an end to that pagan thinking. St. Augustine called upon his young friend Orosius to do this work. Added interest is attached to Orosius' History by reason of his think link with St. Augustine. The great St. Augustine, in his declining years, requested the youthful and far less gifted Orosius to perform a most important task. From the point of view of the modern historian and his scientific method, Orosius' work does not rate very high. The work completed in 418 shows sign of haste. In addition to Holy Scripture and the chronicle of Eusebius revised by St. Jerome, Orosius used Livy, Eutropius, Caesar, Suetonius, Florus, and Justin as sources. All the calamities suffered by the various peoples are described often with annoying monotony. Yet the work is valuable as history, containing as it does contemporary information on the period after 278 A.D. It was used widely during the Middle Ages, and the existence today of nearly 200 manuscript copies is evidence of its past popularity.

▼▲
I'm the author/artist and I want to review The Seven Books of History Against the PagansShort-Run Repri Edition.
Back
Back