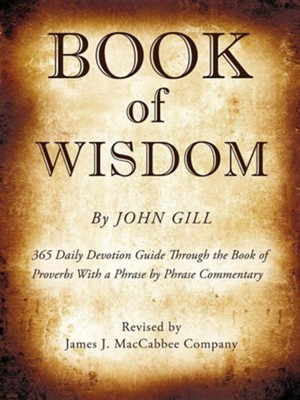 Book of Wisdom by John Gill

▼▲
About the Author John Gill (1697 - 1771) was born in Kettering, Northamptonshire. In his youth, he attended Kettering Grammar School, mastering the Latin classics and learning Greek by age eleven. The young scholar also had a love for Hebrew which would follow him throughout his life. At about twelve years of age, Gill heard a sermon from his pastor, William Wallis, whose text came from Genesis 3:9, "And the Lord called unto Adam, and said unto him, where art thou?" He reflected often on the message of Wallis' sermon and it eventually led to his conversion. It was not until seven years later, however, that young John made a public profession of his faith in Christ, when he was almost nineteen years of age. His first pastoral work was as an intern at age twenty one, and he later became a pastor in Southwark, England. His pastorate lasted 51 years. Gill was an English Bible scholar, and a prolific writer who authored among other things, an expository commentary on the entire Bible. John Gill was a profound scholar whose ministry in some fashion still touches millions of people worldwide. About this Book Unlike human wisdom, the Book of Proverbs is of divine inspiration. The Book of Wisdom is presented as a devotional from John Gill's commentary on these Proverbs. Book of Wisdom is a tribute offered by the James J. MacCabbee Company to Pastor John Gills' lifetime of brilliant work. As Proverbs 8:1, "Doth not Wisdom cry?" This daily devotional is prepared for governmental leaders, leaders in the news and entertainment industries, clergy and laypersons; employees and employers; spouses, parents and children. In fact Wisdom is offered to "anyone who has ears to hear" (see Matthew 13:9). Those who receive such Wisdom as presented here will not be disappointed.

▼▲
I'm the author/artist and I want to review Book of Wisdom by John Gill.
Back