We are OPEN and SHIPPING - click here for shipping estimates
Book of Tradition: Sefer Ha-Qabbalah
By: Abraham I. Daud 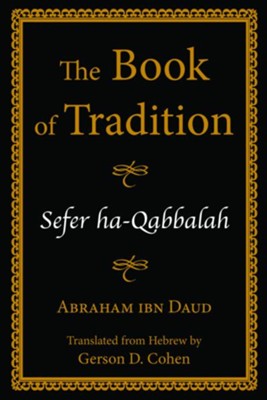 By: Abraham I. Daud
Jewish Publication Society / Paperback
Write a Review
In Stock
Stock No: WW609163

▼▲
An epitaph to the Golden Age of Spanish Jewry Hundreds of years before the Inquisition, the Almohade invasion of Spain wiped out many of the Spanish Jewish communities in Muslim Andalusia ending the Golden Age of Spanish Jewry. Thousands of Jews fled north to Christian Spain, where they had to live among Karaite Jews very different from themselves. Philosopher Abraham ibn Daud responded to this upheaval by writing The Book of Tradition, known as Sefer ha-Qabbalah. This epic on Jewish history from ancient times to the 12th century eulogized Spanish Jewry and reminded readers of a once-thriving culture. No one before had ever attempted to write such a broad history of Jewish civilization. The Book of Tradition is unique and one of the first examples of Jewish historiography. In JPS’s edition of this classic work, first published in 1967, renowned scholar Gerson D. Cohen presents his translation of ibn Daud’s entire text, as well as commentary and an extensive introduction that masterfully provides context for the reader.

▼▲
I'm the author/artist and I want to review Book of Tradition: Sefer Ha-Qabbalah.
Back
×