Skip to main content
The Book of Matthew - An Expositional Commentary on CD with CD-ROM
By: Chuck Missler
Stock No: WW213321 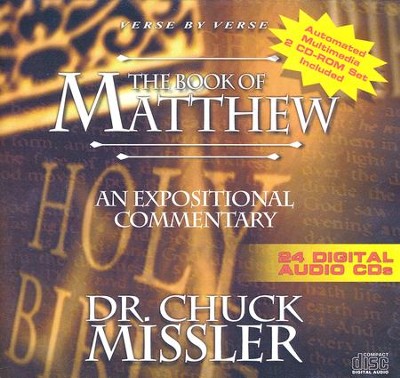 By: Chuck Missler
Koinonia / 2006 / Compact disc
Write a Review
In Stock
This product ships free to addresses in the US!
(Just select Standard shipping at checkout.)
Stock No: WW213321

▼▲
Matthew presents Jesus Christ as the Jesus as the Meshiach Nagid, the Messiah the King, the Lion of the tribe of Judah. It was written by a Jew, to Jews, about a Jew. This book of the Bible uses more Old Testament quotes than any other. The Gospel of Matthew emphasizes the saying of Jesus, including ten parables not found in any other Gospel. After first establishing the royal genealogy, he then goes on to focus on the fulfillment of the Old Testament prophecies. Matthew uses the term "fulfilled" 82 times!

Many scholars now believe that the Gospel was written before Paul's first imprisonment of 57-60 A.D., and that virtually all of the New Testament books were written before Jerusalem's destruction. This study contains 24 hours of verse by verse teachings.

▼▲
I'm the author/artist and I want to review The Book of Matthew - An Expositional Commentary on CD with CD-ROM.
Back
×
Back
×