Skip to main content
OUR BIGGEST BARGAIN SALE EVER: Over 6,000 deals at never-seen-before prices ~ through 8/23. Shop now >
Book of Great American Speeches for Young People
Edited By: Suzanne McIntire
By: Suzanne McIntire, ed.
Stock No: WW389420 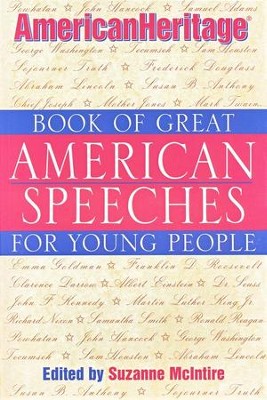 This product is part of our current Biggest Bargain Sale promotion.
Buy Item

▼▲
The history of the United States has been characterized by fervent idealism, intense struggle, and radical change. And for every critical, defining moment in American history, there were those whose impassioned voices rang out, clear and true, and whose words compelled the minds and hearts of all who heard them.

When Patrick Henry declared, "Give me liberty, or give me death!", when Martin Luther King Jr. said, "I have a dream", Americans listened and were profoundly affected. These speeches stand today as testaments to this great nation made up of individuals with bold ideas and unshakeable convictions.

This book includes over 100 speeches by founding fathers, patriots, Native American and African American leaders, abolitionists, women's suffrage and labor activists, writers, athletes and others from all walks of life, featuring inspiring and unforgettable speeches by such notable speakers as: Patrick Henry, Thomas Jefferson, Abraham Lincoln, and many others. These are the voices that shaped our history. They are powerful, moving, and, above all else, uniquely American. Softcover, 292 pages.

▼▲
The history of the United States has been characterized by ferventidealism, intense struggle, and radical change. And for everycritical, defining moment in American history, there were thosewhose impassioned voices rang out, clear and true, and whose wordscompelled the minds and hearts of all who heard them. When PatrickHenry declared, "Give me liberty, or give me death!", when MartinLuther King Jr. said, "I have a dream", Americans listened and wereprofoundly affected. These speeches stand today as testaments tothis great nation made up of individuals with bold ideas andunshakeable convictions.

The American Heritage Book of Great American Speeches for YoungPeople includes over 100 speeches by founding fathers, patriots,Native American and African American leaders, abolitionists,women's suffrage and labor activists, writers, athletes, and othersfrom all walks of life, featuring inspiring and unforgettablespeeches by such notable speakers as:

These are the voices that shaped our history. They are powerful,moving, and, above all else, uniquely American.

SUZANNE MCINTIRE has been collecting great speeches for many years. She is a freelance writer and the mother of two.

▼▲
How many of you remember the agony of having to memorize theGettysburg Address in school? Or perhaps it was something by one ofthe founding father? "Who needs this stuff?" you would moan."What's the point?"
The major problem with historic orations, students have alwayscomplained, is that they are dry. American Heritage, one of theforemost magazine about this nation's culture, has collected aneclectic set of speeches given not only by politicians, but also bypeople in many walks of life, from sports figures to "ordinary"people in extraordinary circumstances.
The Book of Great American Speeches for Young People contains over100 discourses on a myriad of topics. Some classics can be foundwithin, such as Martin Luther King Jr.'s "I Have a Dream andFranklin Delano Roosevelt's address after the bombing of PearlHarbor on December 7, 1941, "a date which will live in infamy." Ona lighter political note, there's the "Checker's Speech," in whichRichard Nixon swore that the only gift he received during 1952campaign was a little cocker spaniel and that "we're gonna keephim."
Other orators in The Book of Great American Speeches for YoungPeople include Malcolm X, Langston Hughes, John F. Kennedy,Elizabeth Cady Stanton and Mark Twain, just to name a few. Speechesare used to influence and encourage, so there are several"declamations" which consider the struggles for women's suffrage,civil right and the evils of slavery. And since the nation wasfounded on free speech, there are also numerous discourses ofprotest and dissent.
The less earthshaking fare, though no less dramatic, is also here.Lou Gehrig paid an emotional farewell to baseball, in which, thoughstricken with the terminal illness that would one day bear hisname, he considered himself "the luckiest man on the face of theearth."
One of the more poignant speeches, to which young readers willrelate, was given by 10-year old Samantha Smith in 1983 to theChildren's Symposium on the Year 2001, after her impassioned letterto Soviet Premier Yuri Adropov made world news. The letter statedher fears nuclear war between his country and American, provingthat young people can make that difference.
In addition to its generous collection, The Book of Great AmericanSpeeches for Young People encourages readers to speak out for whatthey believe in. Its concluding chapter on how (and why) to make aneffective speech will give the reader a boost of confidence and askill which will prove useful long after school days are over.(BookPage, October 2001)

Gr7 Up--A useful compendium of more than 100 speeches that spannearly 400 years of American history, from Powhatan (1609) toSenator Charles Robb (2000). Prominent orators include PatrickHenry, Thomas Jefferson, John Kennedy, Richard Nixon, Martin LutherKing Jr., and Malcolm X. Two indexes allow readers to find aselection by its speaker or its theme. Black-and-white photos andreproductions accompany many of the entries. Alongside the FoundingFathers and patriots are athletes, authors, and media celebrities.The speeches inform readers and provide examples of how the spokenword has affected Americans throughout our past. --David M.Alperstein, Queens Borough Public Library, NY (School LibraryJournal, December 2001)

▼▲
I'm the author/artist and I want to review Book of Great American Speeches for Young People.
Back
Back