We are OPEN and SHIPPING - click here for shipping estimates
PRE-SUMMER CYBER SALE EXTENDED thru 6/1 ~ Over 2,500 items up to 90% off
The Book of Acts in the Setting of Hellenistic History (Hardcover)
Edited By: Conrad Gempf
By: Colin J. Hemer 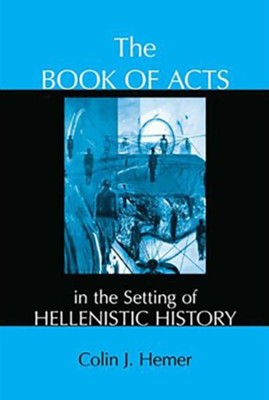 The Book of Acts in the Setting of Hellenistic History (Hardcover)

The Acts of the Apostles is the New Testament book that contains the most obvious ties to its cultural and historical milieu. Yet, until very recently, the trend has been for 20th-century authors to bypass discussion of the relation of Acts to the world and history around it. In this book, Colin Hemer examines various strands of interlocking data, ranging from the epistles of Paul to records of the corn fleet that sailed from Alexandria. The wealth of new literary, epigraphic, and papyrological data brings fresh light to numerous details as well as to the central question of Luke’s conception of Paul’s visit to Jerusalem. The result is a broader understanding of the Hellenistic world in general and a greater appreciation for Acts as a coherent and consistent product of its day. Originally published by J. C. B. Mohr in 1989.

▼▲
I'm the author/artist and I want to review The Book of Acts in the Setting of Hellenistic History (Hardcover).
Back
×