Skip to main content
The Book of Acts in Its Ancient Literary Setting
By: Bruce Winter
Stock No: WW4331 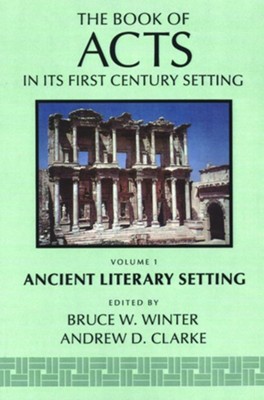 The Book of Acts in Its Ancient Literary Setting

▼▲
This is the first volume in the 6-volume series on The Book of Acts in Its First Century Setting focuses particularly on the literary framework that undergirds Acts. The 14 articles, all written by well-known historians and biblical scholars such as I. Howard Marshall, David Wenham, Philip E. Satterthwaite, Alanna Nobbs, and others, consider in turn the text as historical monograph, ancient rhetoric and speech, the Pauline corpus, biblical history, subsequent ecclesiastical histories, and modern literary method. In this fresh mix of approaches, Acts emerges from its isolation into a world of contemporary rhetoric and recording.

▼▲
The Book of Acts in Its Ancient Literary Setting includes fourteen chapters devoted to the literary framework that undergirds the Book of Acts. Topics include the text as historical monograph, ancient rhetoric and speeches, the Pauline corpus, biblical history, subsequent ecclesiastical histories, and modern literary method. All of these chapters arise out of a consultation by the project's scholars at Cambridge in March 1993.

▼▲
Edwin A. Judge
"The Book of Acts in Its Ancient Literary Setting offers a number of quite fresh approaches to Acts. . . A dozen different genres or types of document are explored here, resulting in a rich mix of options. Acts emerges from its isolation into a world of contemporary rhetoric and recording. This work lifts the study of Acts onto a new, much ore contextual plane. . . A most attractive entr?e to a promising series."

Martin Hengel
"An important contribution to a new and better understanding of Luke's Acts in its true literary and historical context. This work is coming at just the right time, when a change in the older pseudo-critical but (in reality) unhistorical assessment of Luke is becoming visible. It shows that Luke is a real Hellenistic historian writing a monograph about the history of a new messianic Jewish sect called 'Christians'. This group of highly qualified authors gives a convincing overview from quite different perspectives, helping us to do more justice to Luke and to better understand this fascinating early Christian author."

▼▲
I'm the author/artist and I want to review The Book of Acts in Its Ancient Literary Setting.
Back