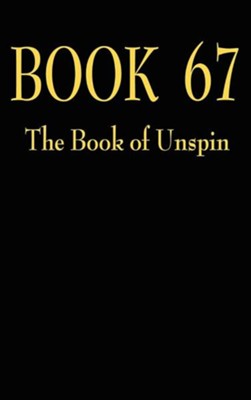 Book 67: The Book of Unspin

▼▲
For different reasons three main characters venture to an isolated town at the northern tip of Vancouver Island, off the coast of British Columbia. Ian is trying to get as far away from Newfoundland as he can, Magda has fallen in love with the magnificence of Nature, and Francis is simply visiting his Aunt. Becoming friends they throw a concert for the town, but end up being "detained" as possible terrorists in the advent of the 2010 Winter Olympics, through events precipitated by a twelve page book (Book 67 - The Original) written by Francis that threatens the world's systems and hierarchy. An adventure story laced with humour and romance, Book 67 exposes the madness of the current "war on terror" and leads one gently to a believable apocalypse.

▼▲
I'm the author/artist and I want to review Book 67: The Book of Unspin.
Back