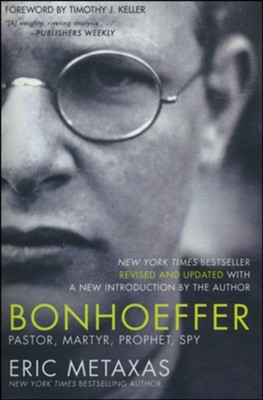 ▼▲
A gripping story of moral courage in the face of unspeakable evil! This groundbreaking biography details previously unknown facts about Bonhoeffer's life---including his decision to return to Germany and his romance---and documents the role he played as a double agent in the plot against Hitler. Revised and updated edition features a new introduction by Metaxas. 640 pages, softcover from Nelson.

Who better to face the greatest evil of the 20th century than a humble man of faith?

As Adolf Hitler and the Nazis seduced a nation, bullied a continent, and attempted to exterminate the Jews of Europe, a small number of dissidents and saboteurs worked to dismantle the Third Reich from the inside. One of these was Dietrich Bonhoeffer, a pastor and author.

In this New York Times bestselling biography, Eric Metaxas takes both strands of Bonhoeffer's life--the theologian and the spy--and draws them together to tell a searing story of incredible moral courage in the face of monstrous evil.

In Bonhoeffer, Metaxas presents the fullest account of Bonhoeffer's life, including his:

This edition, revised and with a new introduction from the author, shares the deeply moving story through previously unavailable documents, including personal letters, detailed journal entries, and firsthand personal accounts to reveal never-before-seen dimensions of Bonhoeffer's life and work.

"Metaxas has created a biography of uncommon power--intelligent, moving, well researched, vividly written, and rich in implication for our own lives. Or to put it another way: Buy this book. Read it. Then buy another copy and give it to a person you love. It's that good." --Archbishop Charles Chaput, author, First Things

"Metaxas presents Bonhoeffer as a clear-headed, deeply convicted Christian who submitted to no one and nothing except God and his Word." --Christianity Today

"Metaxas has written a book that adds a new dimension to World War II, a new understanding of how evil can seize the soul of a nation and a man of faith can confront it." --Thomas Fleming, author, The New Dealers’ War

Eric Metaxas is the #1 New York Times bestselling author of Bonhoeffer, Martin Luther, If You Can Keep It, Miracles, Seven Women, Seven Men, and Amazing Grace. His books have been translated into more than twenty-five languages. His writing has appeared in the Wall Street Journal, the New York Times, and the New Yorker, and Metaxas has appeared as a cultural commentator on CNN, Fox News, and MSNBC. He is the host of The Eric Metaxas Radio Show, a daily nationally syndicated show aired in 120 U.S. cities and on TBN. Metaxas is also the founder of Socrates in the City, the acclaimed series of conversations on "life, God, and other small topics," featuring Malcolm Gladwell, Ambassador Caroline Kennedy, Baroness Caroline Cox, and Dick Cavett, among many others. He is a senior fellow and lecturer at large at the King’s College in Manhattan, where he lives with his wife and daughter.

▼▲
I'm the author/artist and I want to review Bonhoeffer: Pastor, Martyr, Prophet, Spy, softcover.
Back
Back