Skip to main content
SPRING CYBER EVENT STARTS NOW: And it's a really BIG deal! Up to 88% off through 5/24>
Bonhoeffer the Assassin?: Challenging the Myth, Recovering His Call to Peacemaking - eBook
By: Mark Thiessen Nation, Anthony G. Siegrist, Daniel P. Umbel
Stock No: WW46168EB 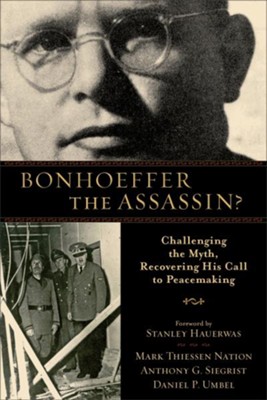 Bonhoeffer the Assassin?: Challenging the Myth, Recovering His Call to Peacemaking - eBook

▼▲
Bonhoeffer appeals to us because of his uncompromising moral stand. It was not just any moral conviction, but a clear moral perspective that all of hope that we ourselves would emulate.

We have read his biography and we know he resisted the Third Reich. But are we clear about how Bonhoeffer resisted? In the 1920s he was a committed pacifist; this is well known. But scholars disagree about how the onset of Hitler's atrocities affected Bonhoeffer's thought and whether his posthumously published Ethics along with his personal letters reflect a shift in his convictions. Did Bonhoeffer come to believe that violence was acceptable in specific circumstances? And if so, did he, in fact, act on that new belief in his work for the German military intelligence organization known as the Abwehr?

Many argue that Bonhoeffer did leave behind his pacificst ethic. Yet, others disagree. In Bonhoeffer the Assassin? a team of scholars argue that Bonhoeffer did not abandon this core component of his discipleship and that both the historical evidence and the textual evidence corroborate their view. Mark Nation, Anthony Siegrist, and Daniel Umbel reexamine historical data from Bonhoeffer's own life as well as pertinent sections of his Discipleship and Ethics and as they do so invite us to reconsider Bonhoeffer's theology and his life.

▼▲
Most of us think we know the moving story of Dietrich Bonhoeffer's life--a pacifist pastor turns anti-Hitler conspirator due to horrors encountered during World War II--but does the evidence really support this prevailing view? This pioneering work carefully examines the biographical and textual evidence and finds no support for the theory that Bonhoeffer abandoned his ethic of discipleship and was involved in plots to assassinate Hitler. In fact, Bonhoeffer consistently affirmed a strong stance of peacemaking from 1932 to the end of his life, and his commitment to peace was integrated with his theology as a whole. The book includes a foreword by Stanley Hauerwas.

▼▲
An enormously important book. It is exactly right on the core of Bonhoeffer's Christian ethics and incisively helpful on the ethics of peace and war. The point is not principlism but God in Jesus entering incarnationally with compassion into the midst of our defenses and alienation, bringing healing and our participation in Jesus's nonviolent way.
-Glen Stassen,
author of A Thicker Jesus: Incarnational Discipleship in a Secular Age

Nation, Siegrist, and Umbel challenge the widely-held assumption that after the beginning of World War II Bonhoeffer not only participated in the anti-Nazi conspiracy but set aside his earlier pacifism and adopted a more 'rational' and 'realistic' stance, which included participation in the plot to assassinate Hitler. The close readings of Bonhoeffer's biography set in the larger story of the conspiracy and of the Ethics manuscript, in which the more realistic account is supposedly found, are of particular value. Regardless of whether you are persuaded by the authors concerning Bonhoeffer's level of involvement in the attempt to kill Hitler, this volume will decisively reframe the way we read the thought and life of this most remarkable Christian.
-Barry Harvey,
professor of theology, Honors College and the Graduate Faculty in Religion, Baylor University

This book offers a well-researched, well-thought-through argument that demands attention from anyone interested in the legacy of Dietrich Bonhoeffer. It is a new look at his life and work that offers a critical lens on traditional interpretations of his devotion to the Sermon on the Mount in the face of real life crisis. These authors are to be applauded for this significant
-Reggie L. Williams,
assistant professor of Christian ethics, McCormick Theological Seminary

If you mention Bonhoeffer, just about everyone thinks of his involvement in a conspiracy to kill Hitler. This becomes a major key--sometimes the key--to interpreting his writings. This fascinating book not only questions this assumption but also shows what happens when you read him without it. A thoroughly engaging book.
-Arne Rasmusson, professor in systematic theology, University of Gothenburg; resident research fellow, Center of Theological Inquiry, Princeton, New Jersey

This extensively researched and passionately argued book will invariably provoke discussion in Bonhoeffer studies as it challenges misconceptions of his role as assassin and patriot. It persuasively reconciles Bonhoeffer's pacifist writings with his political activities in the Abwehr, as well as themes of pacifist obedience with political responsibility often separated by Niebuhrian 'political realist' readings. This is an invaluable study of Bonhoeffer's theological ethics that must be taken
-David Haddorff,
associate professor of theology and ethics, St. John's University

Those of us who have been uneasy with the too-glib assumption that Bonhoeffer gave up his commitment to pacifism to join a conspiracy against Hitler can now rejoice. This book's careful scholarship thoroughly proves that the major change in Bonhoeffer's theology happened much earlier and that he remained steadfast thereafter as a pacifist until his death at Nazi hands. This clarifying volume must be read by
-Marva J. Dawn,
theologian, lecturer, and author of The Sense of the Call, Unfettered Hope, and Being Well When We're Ill

This book's provocative title is designed to challenge the received view of Dietrich Bonhoeffer's role in the German Resistance's plans to overthrow the Nazi regime by murdering Hitler. The authors seek to show that he had no sympathy with such political violence. Instead he remained true to the teachings of the Sermon on the Mount, especially to Jesus's teachings about the ethics of peace, which he had outlined so forcefully in his book Discipleship. Their careful analysis of Bonhoeffer's writings finds no evidence that he endorsed tyrannicide. They make a strong case for a re-evaluation of his legacy.
-John S. Conway,
emeritus professor of history, University of British Columbia

▼▲
I'm the author/artist and I want to review Bonhoeffer the Assassin?: Challenging the Myth, Recovering His Call to Peacemaking - eBook.
Back
Back