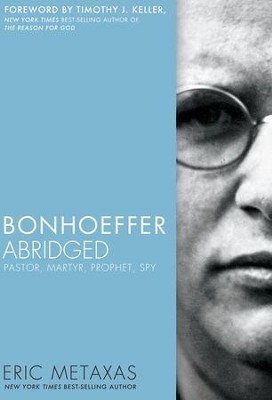 ▼▲
A gripping story of moral courage in the face of evil! In this definitive and highly readable abridgment, Metaxas details previously unknown facts about Bonhoeffer's life---including his decision to return to Germany and his passionate romance---and documents his role as a double agent in the plot against Hitler. Includes several photographs and a new essay. 256 pages, softcover from Nelson.

From the New York Times best-selling author, Eric Metaxas, an abridged version of the groundbreaking biography of Dietrich Bonhoeffer, one of the greatest heroes of the twentieth century, a man who stood up to Hitler.

A definitive, deeply moving narrative, Bonhoeffer is a story of moral courage in the face of monstrous evil. As Adolf Hitler and the Nazis seduced a nation, bullied a continent, and attempted to exterminate the Jews of Europe, a young pastor named Dietrich Bonhoeffer become one of the first to speak out against Hitler. As a double agent, he joined the plot to assassinate the Führer, and he was hanged in Flossenberg concentration camp at age thirty-nine. Since his death, Bonhoeffer has grown to be one of the most fascinating, complex figures of the twentieth century.

Bonhoeffer brings the reader face-to-face with a man determined to do the will of God radically, courageously, and joyfully—even to the point of death. It is the story of a life framed by a passion for truth and a commitment to justice on behalf of those who face implacable evil.

Timothy Keller is the founder and senior pastor of Redeemer Presbyterian Church in New York City, and the New York Times bestselling author of The Reason for God and The Prodigal God. He has also mentored young urban church planters and pastors in New York and other cities through Redeemer City to City, which has helped launch over 200 churches in 35 global cities to date.

▼▲
I'm the author/artist and I want to review Bonhoeffer Abridged.
Back
×
Back
×